We’ve not long left Hoi An after spending just over two weeks situated just outside of the city centre. The average time that most travellers normally seem to spend in Hoi An is between 4-5 days at most. James and I wanted to spend a little longer in the town so we could really look into everything that it had to offer. 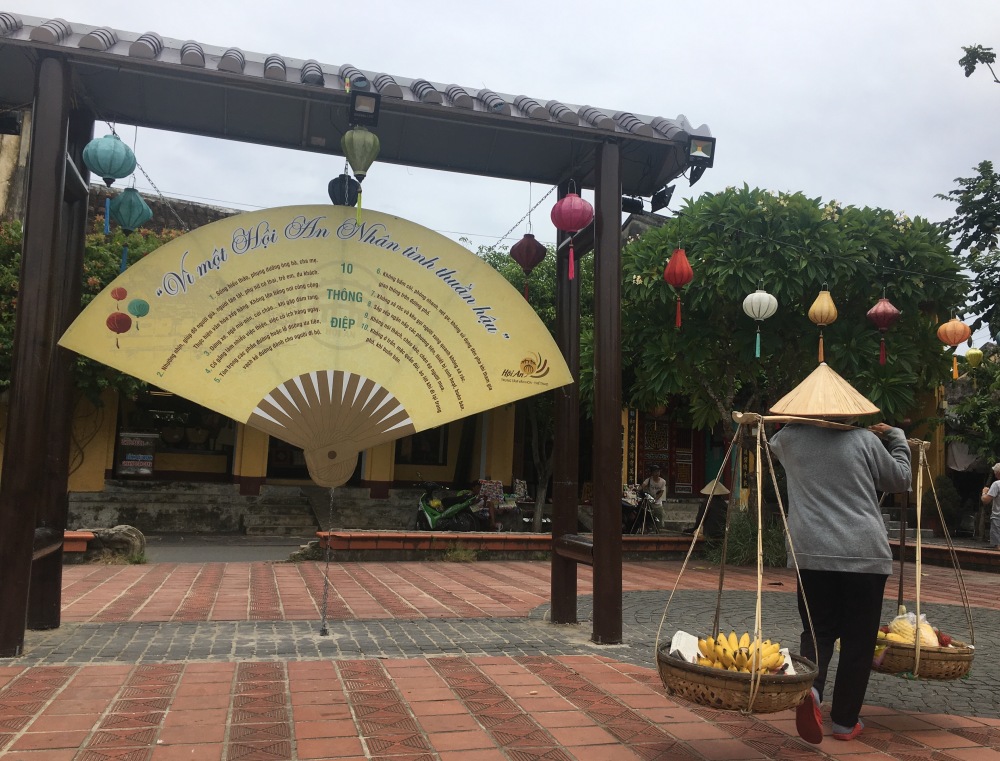 I’ve found that if you ask someone what they think of Hoi An (providing that they’ve been there) will usually elicit the same response. Said person will usually smile and say that it’s lovely, because Hoi An IS lovely. I’ve yet to see a town in Vietnam as beautiful as this one. In the daylight, the floral blooms along with the colourful lanterns and old timey French style buildings call to photographers everywhere, so if you visit in the morning, it can be difficult not to step into the background of lots of photo shoots. ( I indulged in some picture taking of my own as well!)

The town is listed as an ancient heritage site and has around 22 different historical attractions that you can visit ranging from temples and ancient houses to museums. In order to see these sites you have to purchase a ticket that is valid for the entirety of your stay in Hoi Ain. This ticket costs 120,000 VND (around £4) and allows you to see 5 sites out of the 22. This is usually enough for most people as you are provided with a paper guide which enables you to pick out what sites you would like to see. James and I each bought a ticket but we were also lucky enough to be given a ticket each with 3 stamps left on them by some friends who left town before us. We chose to look at the Japanese covered bridge, a communal house, the Chinese Assembly Hall, the museum on life in Hoi An, an ancient house that belonged to a community member and a few different temples.

The temples in Hoi An are beautiful. They have such intricate designs in them and they include so much detail that it’s hard to take it all in at once. Some of them even have beautiful gardens at the back of the temples. 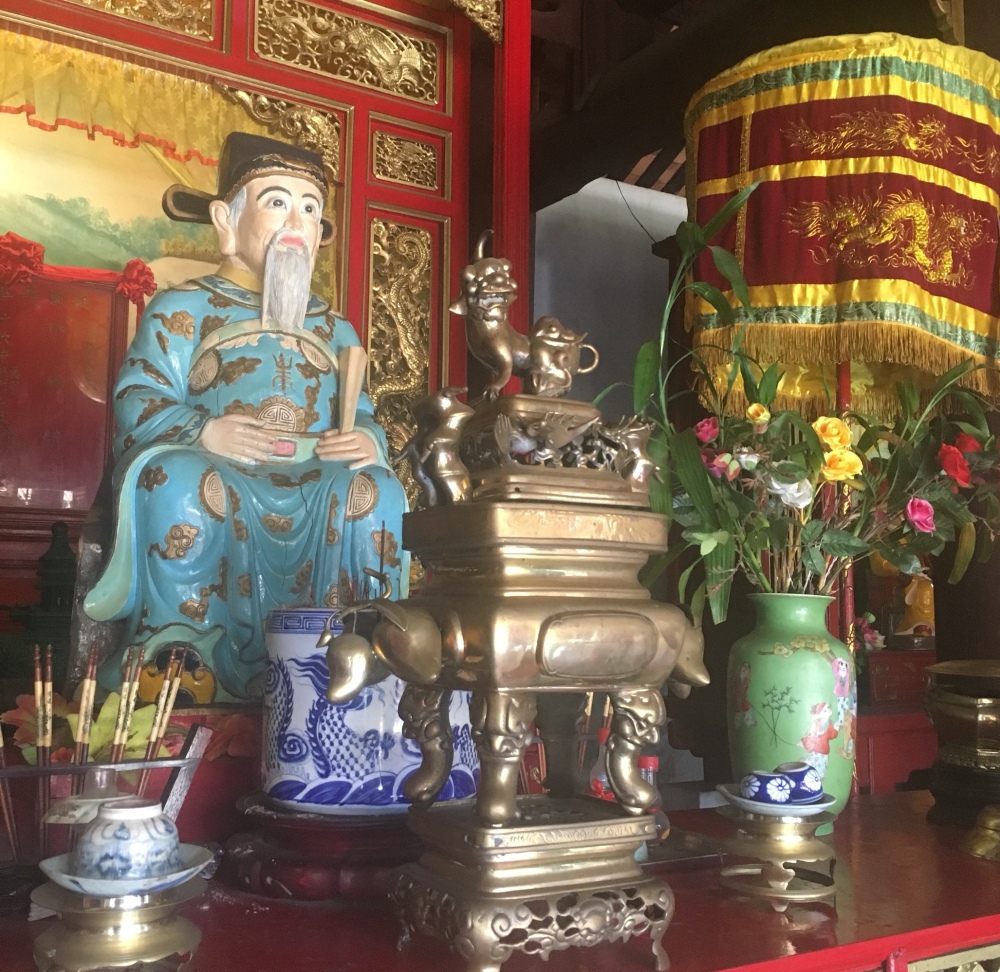 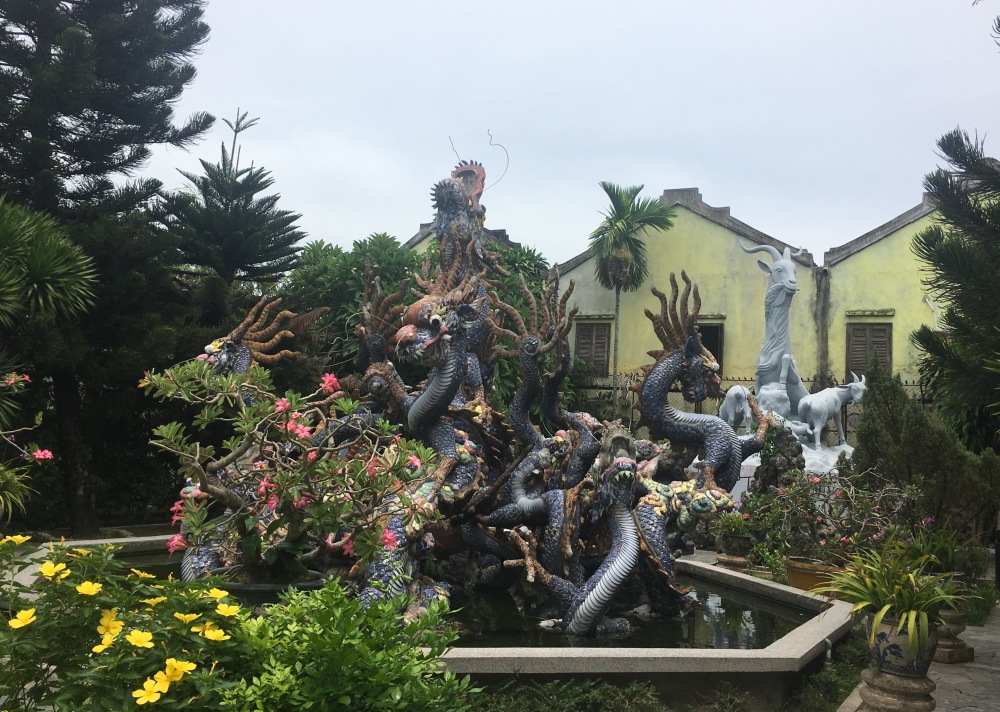 At night, Hoi An takes on a whole new level of life. The lanterns are lit up and look beautiful. Along the river, you’ll be offered the chance to buy lit lanterns to float down the river. You’ll also be offered many boat rides in which you can also float lanterns. The river side lanterns usually cost 10,000 VND (roughly 30p) and are great fun to get immersed in the local scene on your first night (especially if like us, your first night happens to be during the full moon festival meaning that the only outside light comes from the lit lanterns.

The majority of hotels in Hoi An seem to be good value. We stayed in both the Ruby River Villa (which was owned by a local family who invited us to eat dinner with them and sing karaoke one night) and the Hoi An Jade Hotel. Both hotels had beautiful pool areas where we could cool down and relax after a morning of exploring. As far as I could see, most of the hotels in Hoi An seemed to provide a bike rental service for a small fee or even sometimes free of charge which worked out extremely useful for us on days when we wanted to explore outside of the town.

There are a number of cafes and coffee shops in Hoi An but I want to talk about those in a seperate post as the majority of the food that I encountered was amazing!

One thing that you should bear in mind when considering travelling to Hoi An is transport. In most cases, if you plan to fly or travel via train, you would need to make your way to Da Nang and then take a 30 minute taxi ride to Hoi An. A lot of hotels help with travel arrangements and may be a better way to get to Hoi An if you are wary of getting into taxis.