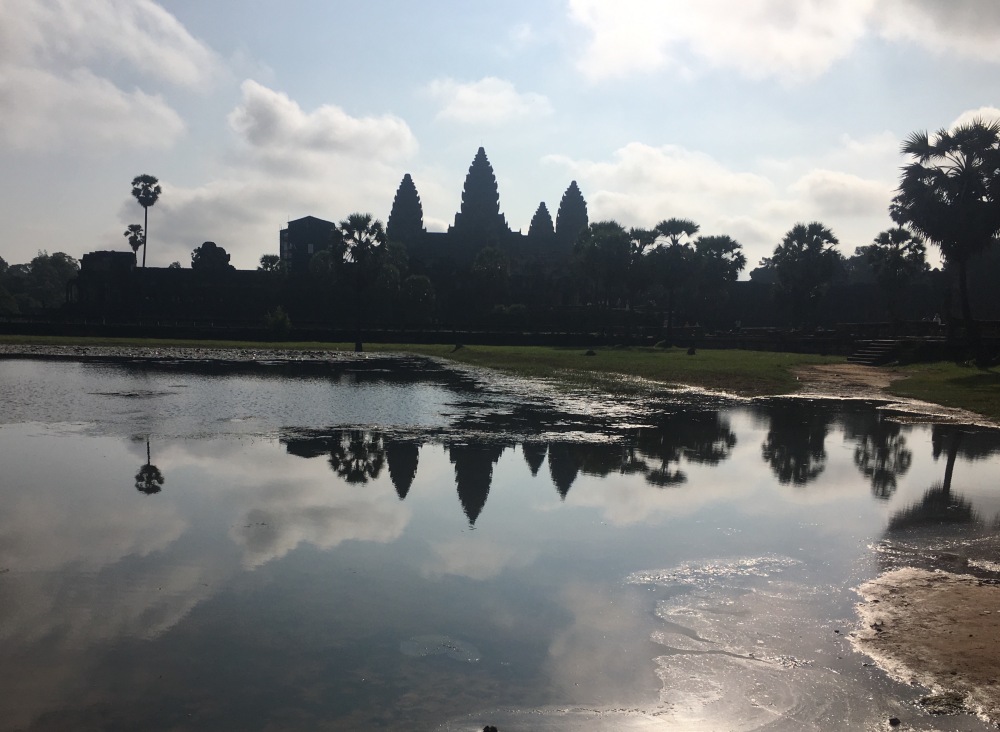 After our time on the island of Koh Rong Samloem it was time to head to the capital of Cambodia, Phnom Penh. As there was no internet in the island, we had to wait until we arrived at the docks of Sihanoukville before we could book our transport (we’d booked our hostel before we arrived at the island). We opted for the Great Ibis bus service as we had heard good things, the earlier transport was full so we had to wait until 15:30 for our bus which was fine as we thought the journey would only take 4 hours at most… 6 hours later we arrived in Phnom Penh. The ride was fine (even though the journey time took longer than expected) we had a mini bus that had plenty of room, wifi and even had some snacks provided. Great Ibis are a service that I would recommend to anyone travelling through Cambodia.

I think that it’s safe to say that I was fairly on edge for the 2 nights that we stayed in Phnom Penh. We’d read a lot about bag snatchers and travellers being mugged but it wasn’t until we got into the city centre and saw all of the caged tuk tuks driving around that it really sank in. Luckily, we found a tuk tuk driver straight away who took us to our hostel for $3. Our hostel was lovely, we got a private room which after a couple of weeks of basic accomodation, was actually more like a nice hotel. If anyone is interested, we stayed at the Billabong Hostel. Due to its cheap food and saltwater swimming pool it’s is where we ended up spending most of our two days in Phnom Penh. 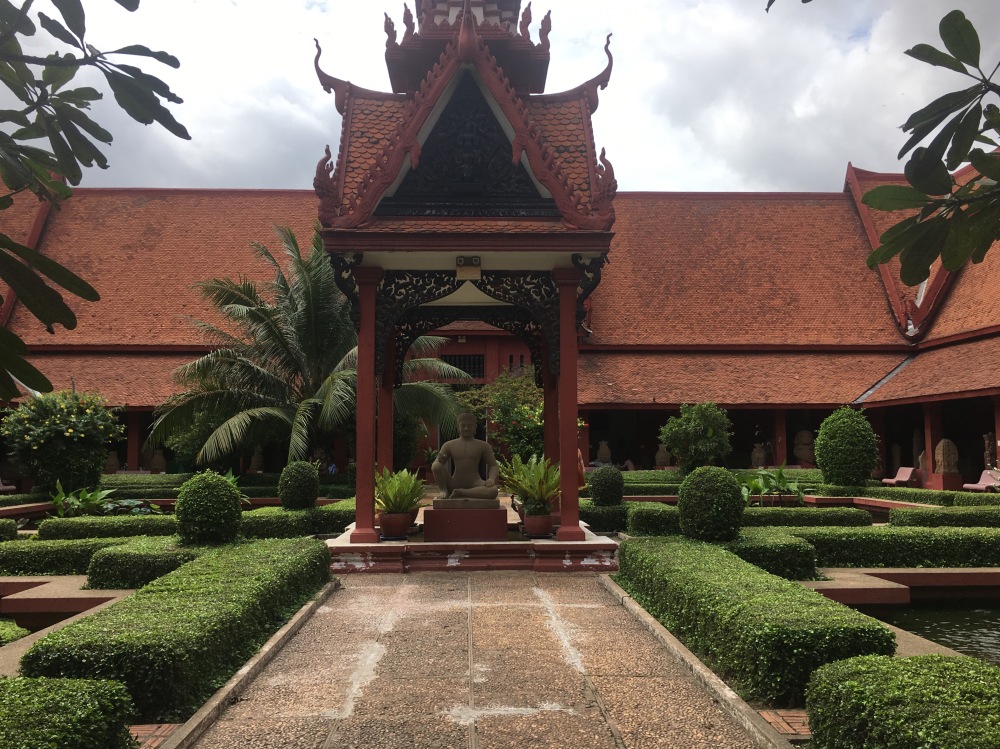 We visited the National museum of Cambodia which was filled with statues and artwork. We paid an extra $5 each for a portable guide which I felt was handy (but could be a little repetitive at times). After the museum, we decided to walk over to the Palace but unfortunately it was closed in that particular day. 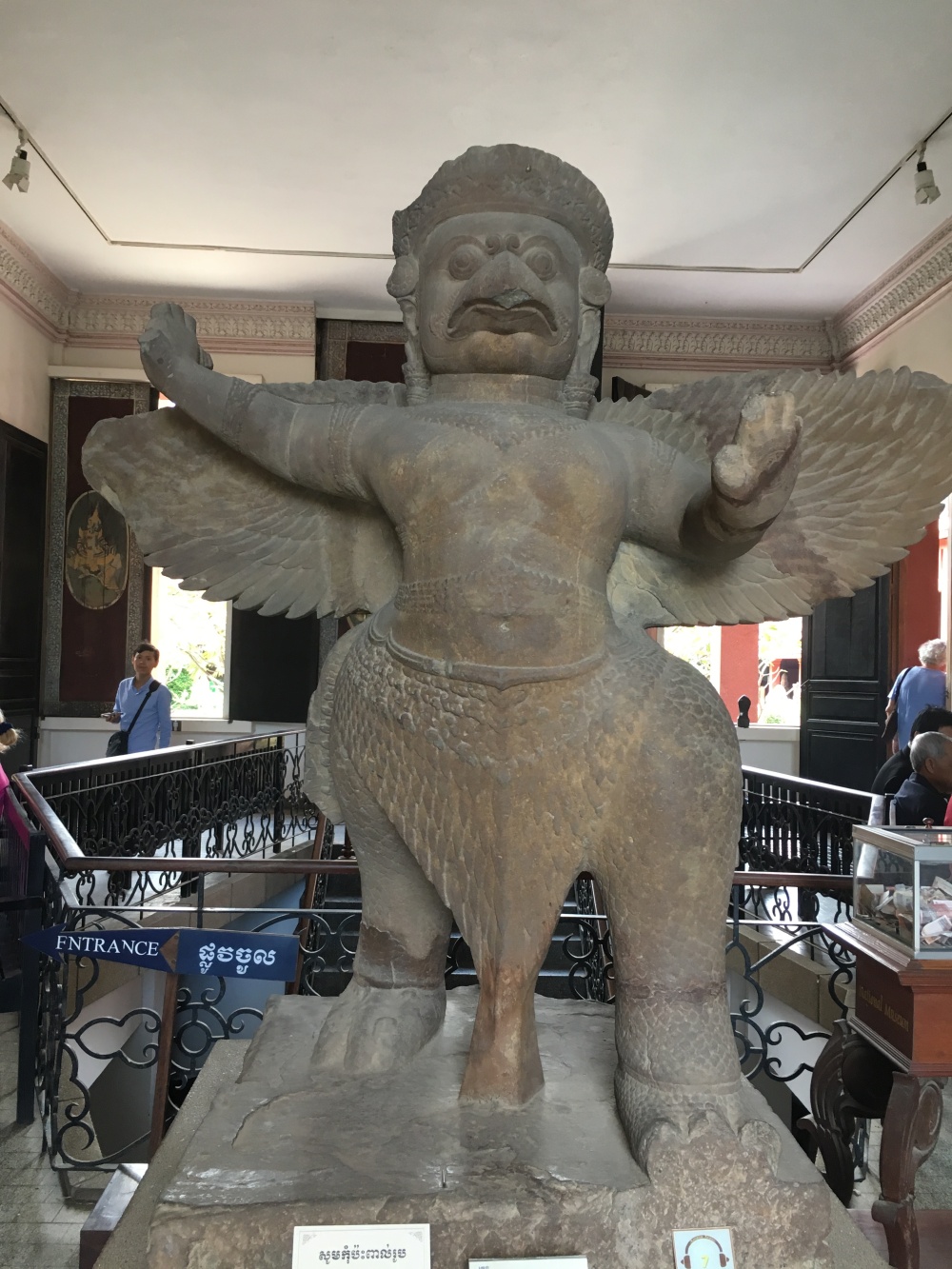 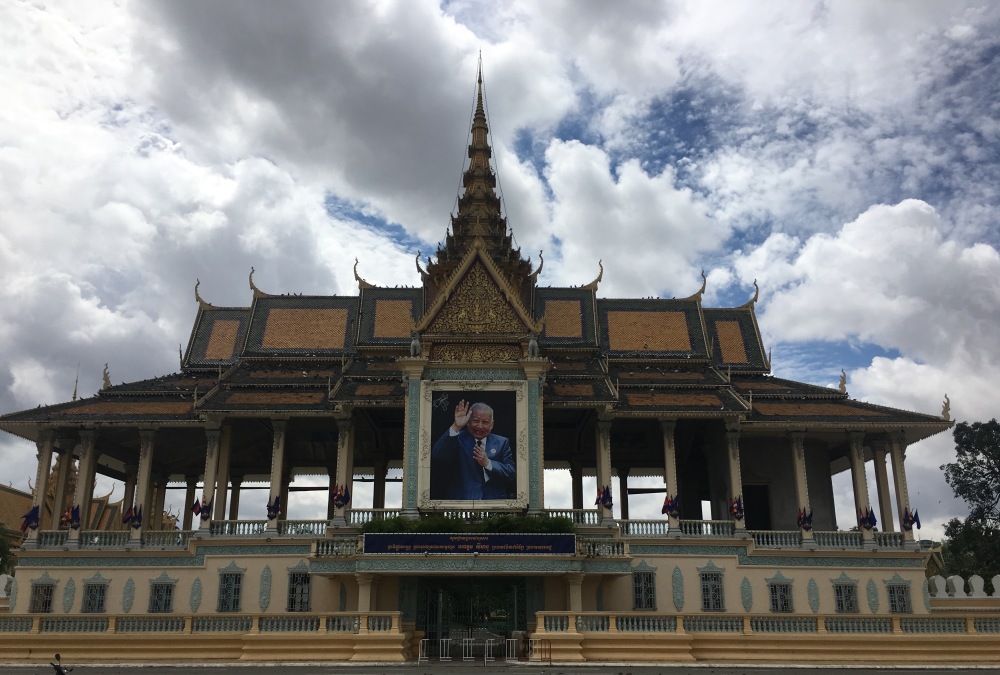 Unless you plan to visit the genocide museum and killing fields, I would say that 2 nights is more than enough for Phnom Penh. I chose not to visit these areas because I knew that they would distress me.

After Phnom Penh, it was time to board another Great Ibis bus for a 6 hour drive to Siem Reap. Siem Reap was one of my favourite places in Cambodia, it’s a pretty town with a lively day and night scene. There was some great food available and I tried my first fish amok from ‘Eat at Joes’ a restaurant that puts all of its profit back into the community.

There is a great night market in the town centre and I managed to pick up a couple of colourful scarves at a good price (after a bit of negotiation). Pub street also comes alive at night and we had a couple of good evenings out with friends! 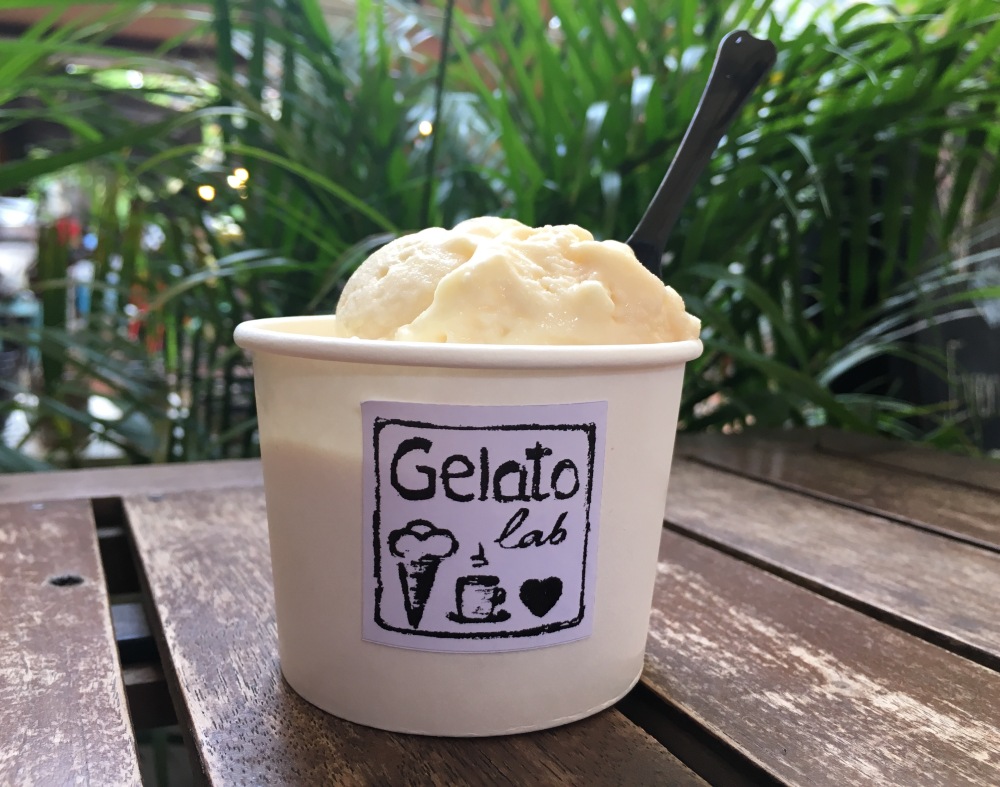 Now for the biggest reason we came to Siem Reap- on the 23rd October, we visited Angkor Wat! We left for the museum at 7am and we could see that we made the right decision as we were leaving the temple at 09:30 as it became super busy! A sunrise tour is also available from most places and maybe worth cBecause  onsidering.

Angkor Wat was incredible! It covers a large ground and we spent an hour and a half walking around looking at all of the different areas. In the main building area you can receive a blessing from a monk but sadly there were none around when we were in that area. 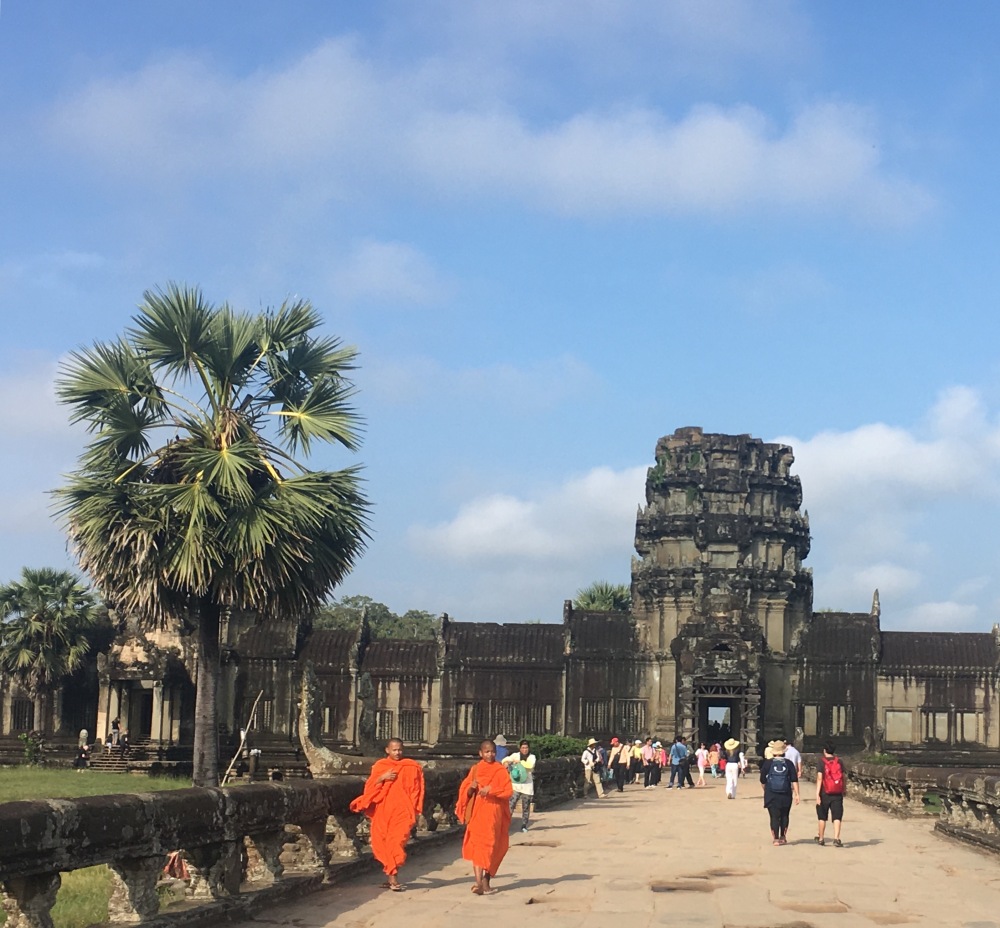 If you carry on walking through the main building and up a flight of stairs you come across a big courtyard with a temple set on a steep flight of stairs. This is the holy area of Angkor Wat and I’m a bit embarrassed to say that I was denied entry to this section because i had a scarf around my shoulders in place of a long sleeve tshirt. James went up though and got some great pictures.

After Angor Wat we were taken through a gate in the road to Angkor Tom. This is a vast area with a number of temples spread out over it. You’ll also see elephants being walked and wild monkeys running around the woodland areas. We started at the biggest temple which had 24 towers to represent the different areas of Cambodia. 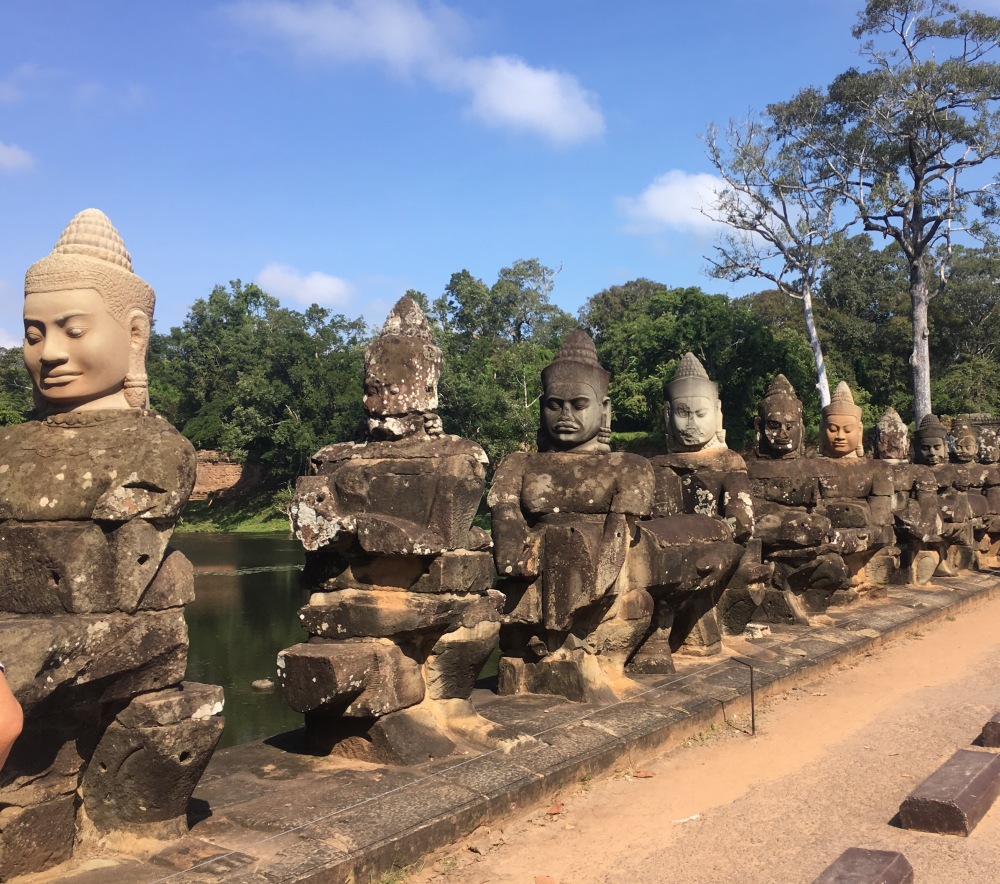 After a few hours of exploring, we stopped for a quick drink and then made our way to Ta Prohm which is famed as the temple where Tomb Raider was filmed. A lot of this temple was in ruins and there were a couple of signs advising people not to enter certain areas for their own safety but the area was beautiful. Giant tree roots were growing amongst the stones and moss covered a lot of the stones that had fallen down but you could still see where the stone had been carved to make certain shapes in the walls. 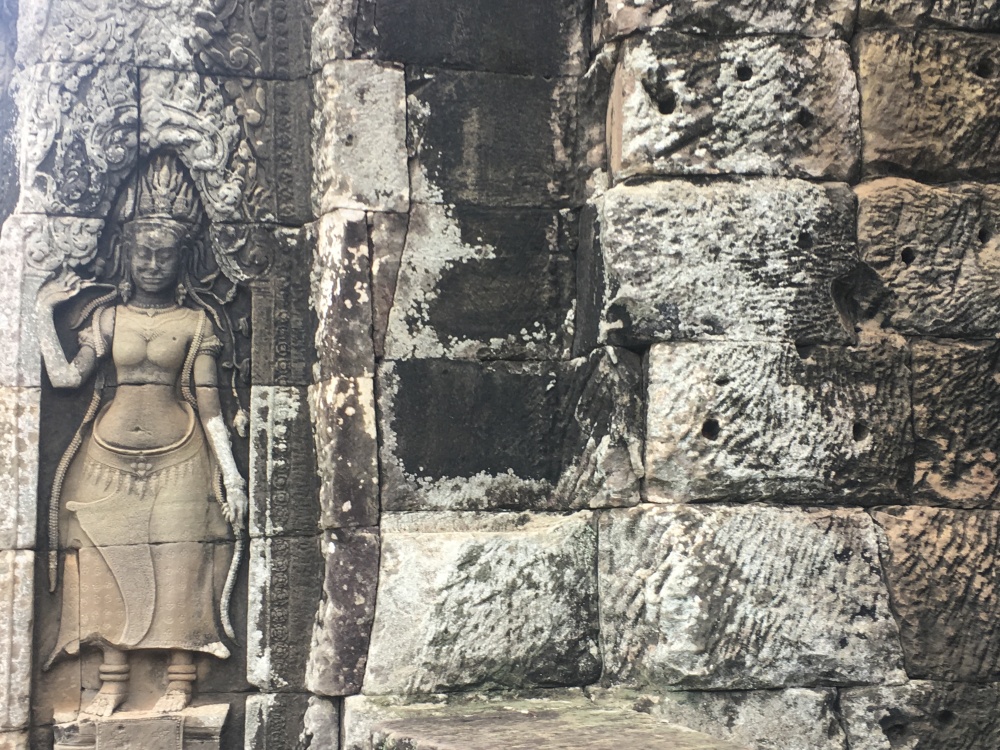 Despite the ruins from age, a lot of the structures remained intact and were quite easy to get lost in as there were so many corridors.

If you are planning a trip to Cambodia then it goes without saying that you should take a day out for Angkor Wat and the other temples. Tickets can be quite expensive starting at $37 for a one day pass but it’s so worth it! It may also be worth noting that the official tickets will have your photo printed on them (picture will be taken at the ticket office) so no need to bring a passport picture with you.