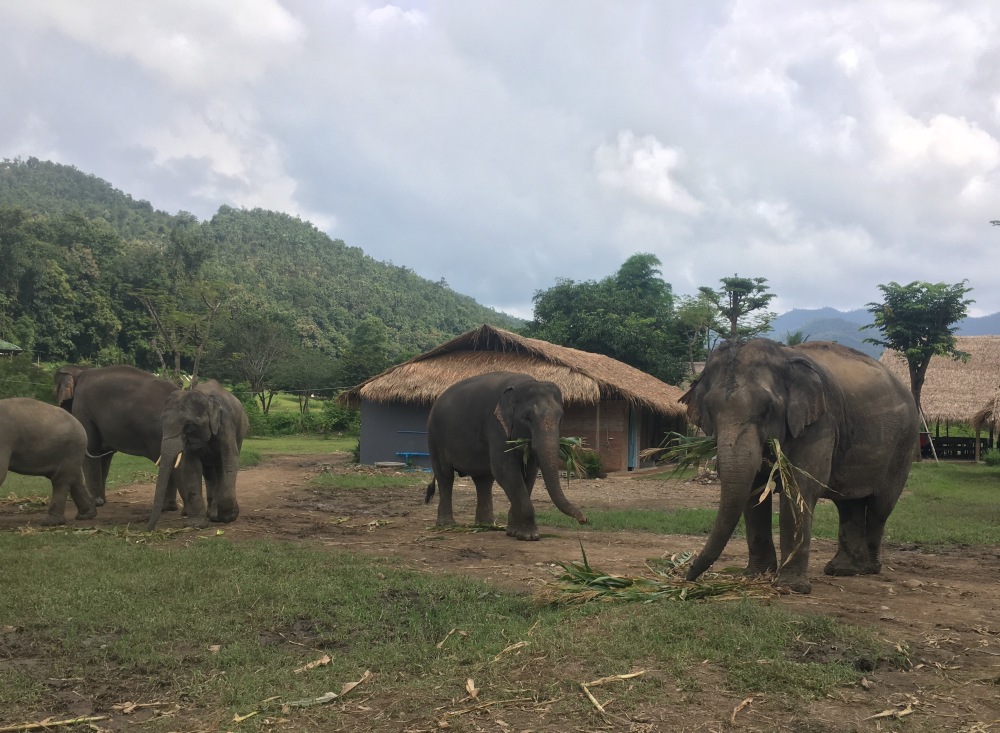 Towards the end of October, James and I flew from Bangkok to Chiang Mai. We arrived in the evening and ordered an Uber to our first hostel. It was at this hostel where we booked the first of our Thai experiences- a trip to an elephant sanctuary! Something that I have wanted to do for the last 5-7 years. We did some research on the different sanctuaries in the area and decided to go with a trip to the Maeklang Elephant Conservation. This particular conservation homes 6 elephants in total, a family of three as well as three rescue elephants, two taken from logging work and one from tourism in Bangkok.

We arrived a little before 9am so we could put on the outfits provided by the sanctuary. We were then given a safety talk and were cautioned on what to do should an elephant start pushing at us, the baby elephant (Sanday) in particular was playful and didn’t quite know his own strength yet so I had to roll out of his way on two occasions! It’s good that the centre give you these warnings because I think some people forget during the magic of feeding the elephants that these massive creatures could easily crush a tiny (in comparison) human body if they felt inclined to do so. 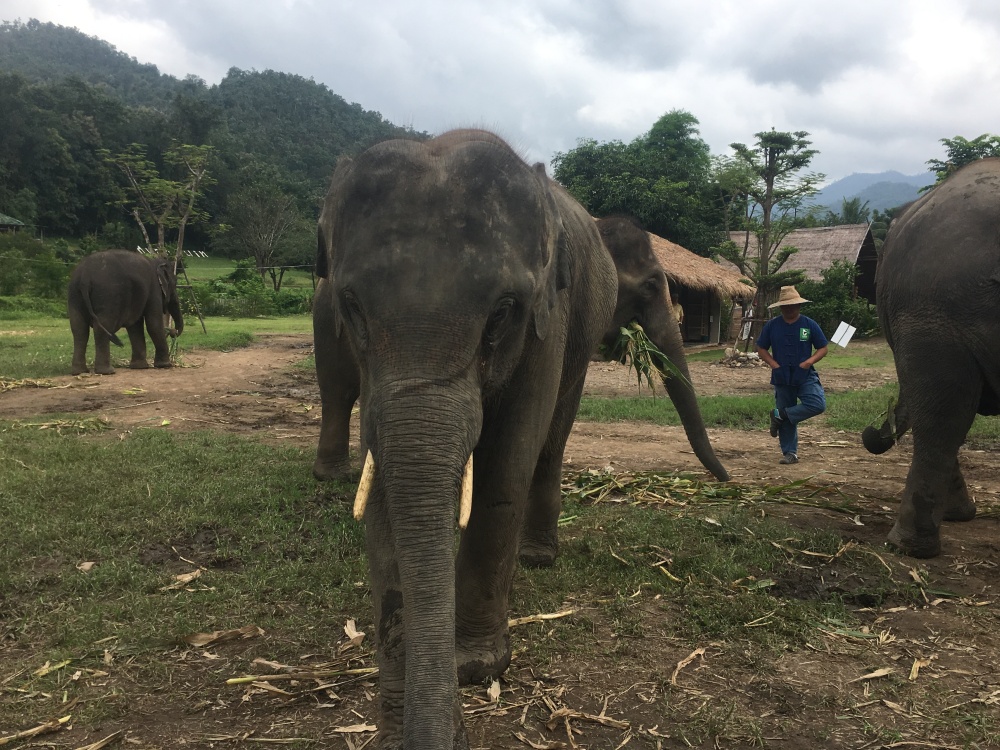 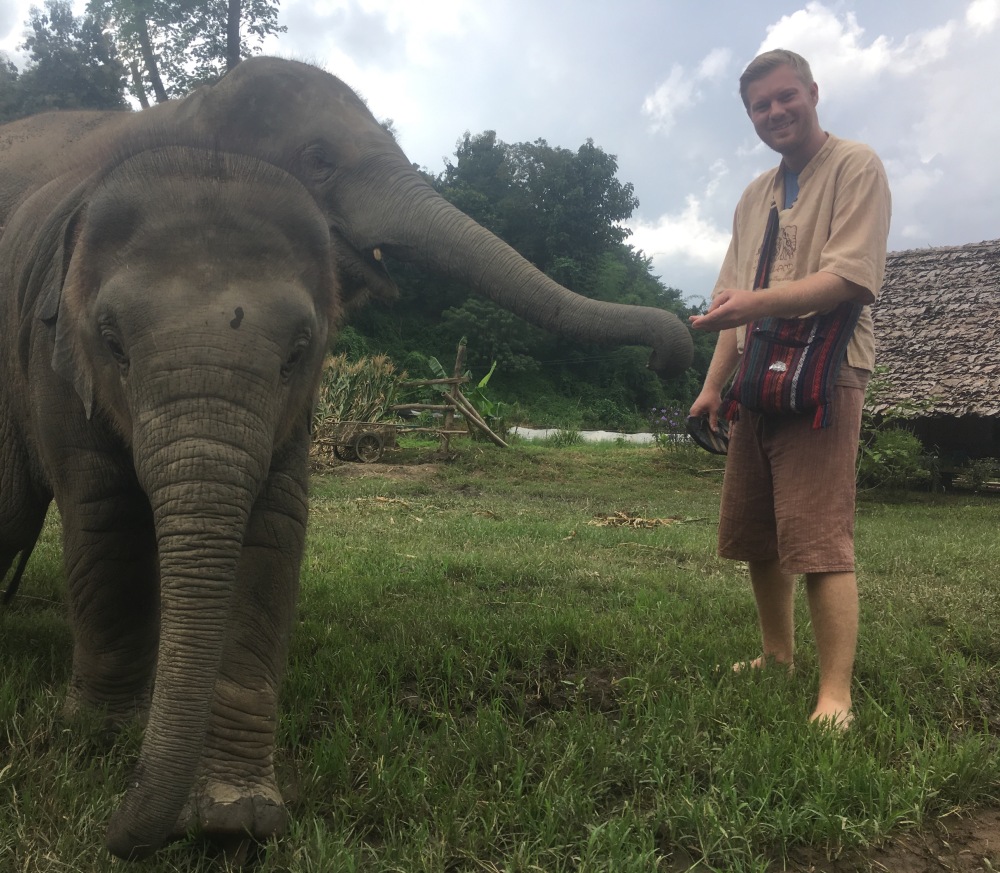 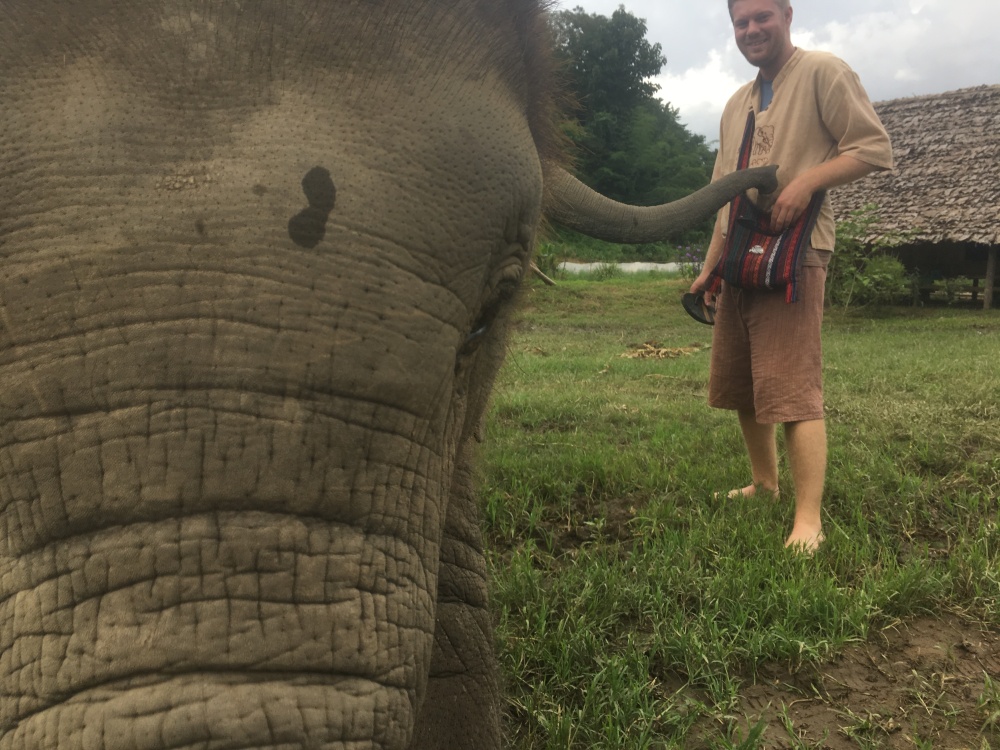 We were then walked to the feeding station where we prepped all of the bananas that were to be used. The elephants were so funny during the feeding. I felt a little intimidated at first as they were so big and they would just walk right up to you but I quickly warmed to them and couldn’t get the bananas to their trunks fast enough, at least, not fast enough to stop them trying to dig through my bag for more! 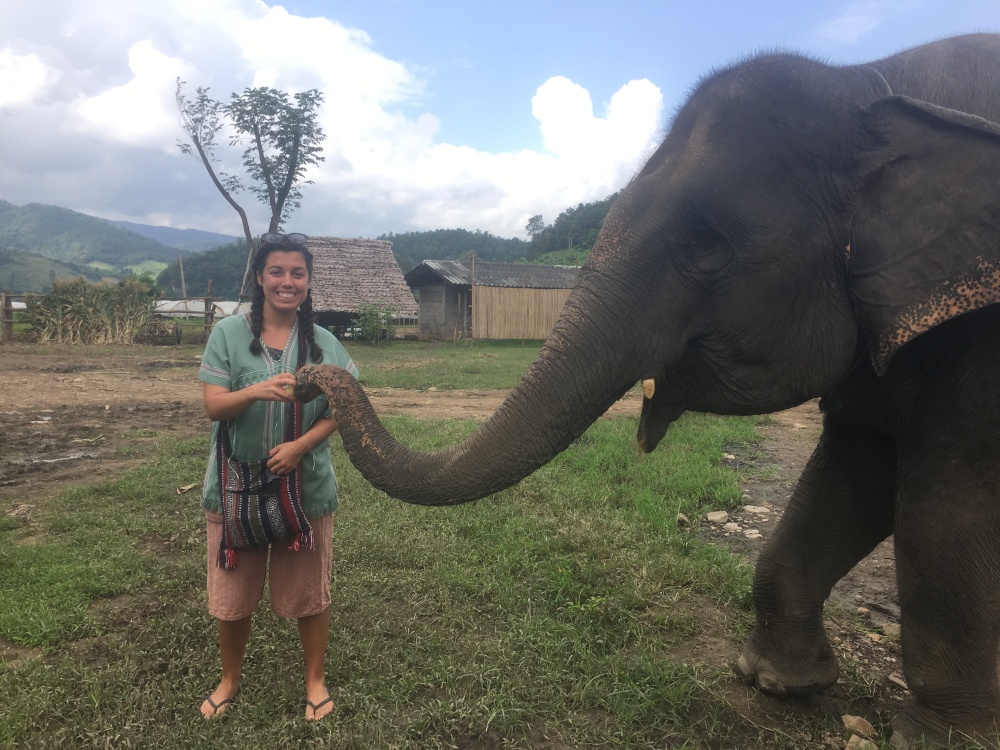 Sanday (the baby) took a bit of a shining to me during this session and made me peel the bananas and put them in his mouth. He wouldn’t take them in his trunk and would turn his head if you gave him an unpeeled banana. He was a little diva! 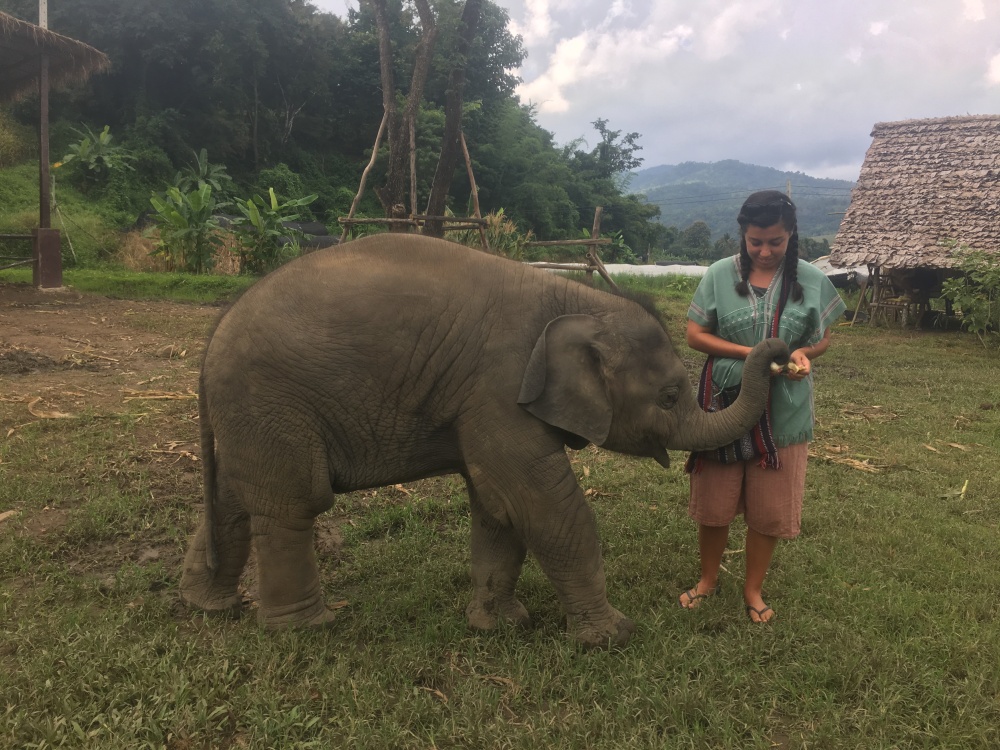 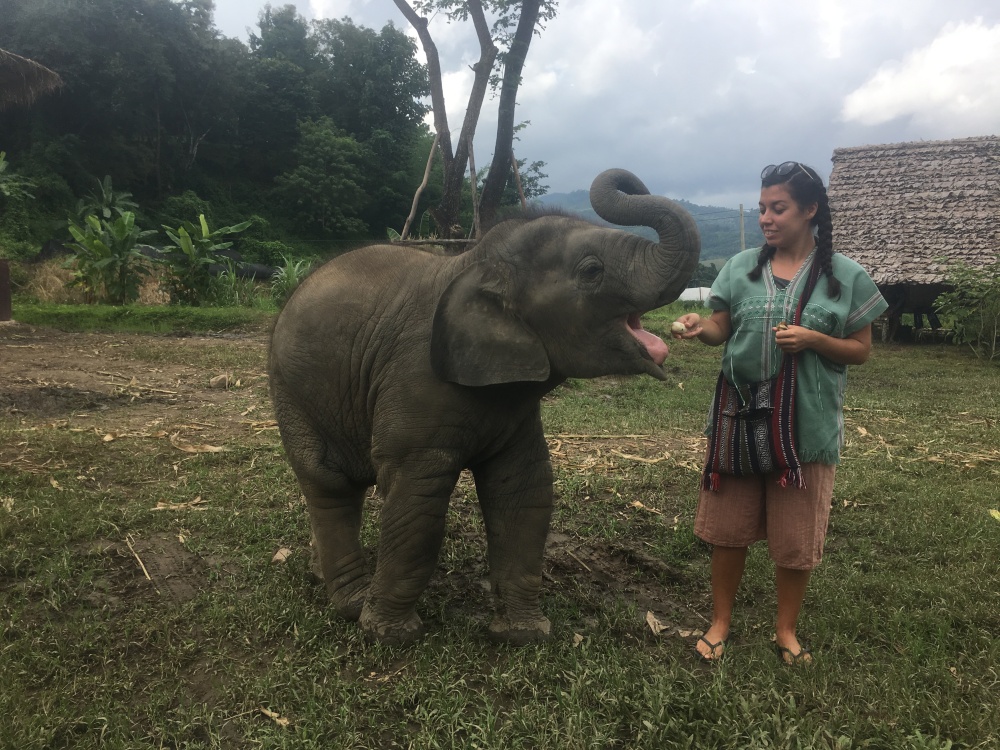 After the bananas, the elephants were fed sugarcane. It was during this time that they were at their calmest and we were able to get some pictures with them. My favourite elephant at the sanctuary was Bon Bon, she was 17 months pregnant and was so calm and affectionate. She followed both James and I around the field that the elephants were held in. You could see her baby moving around in her tummy which was such a strange but beautiful thing to see. 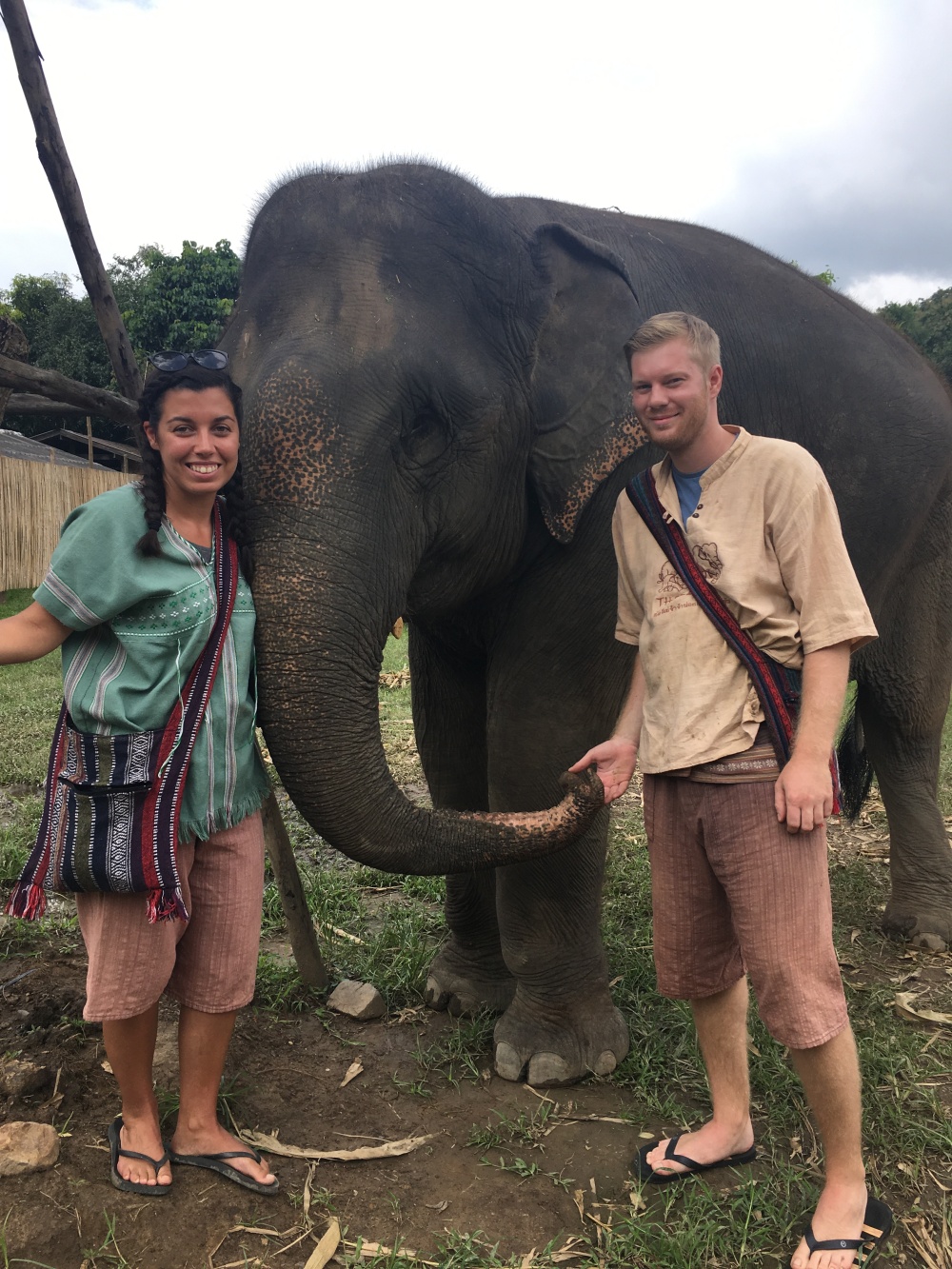 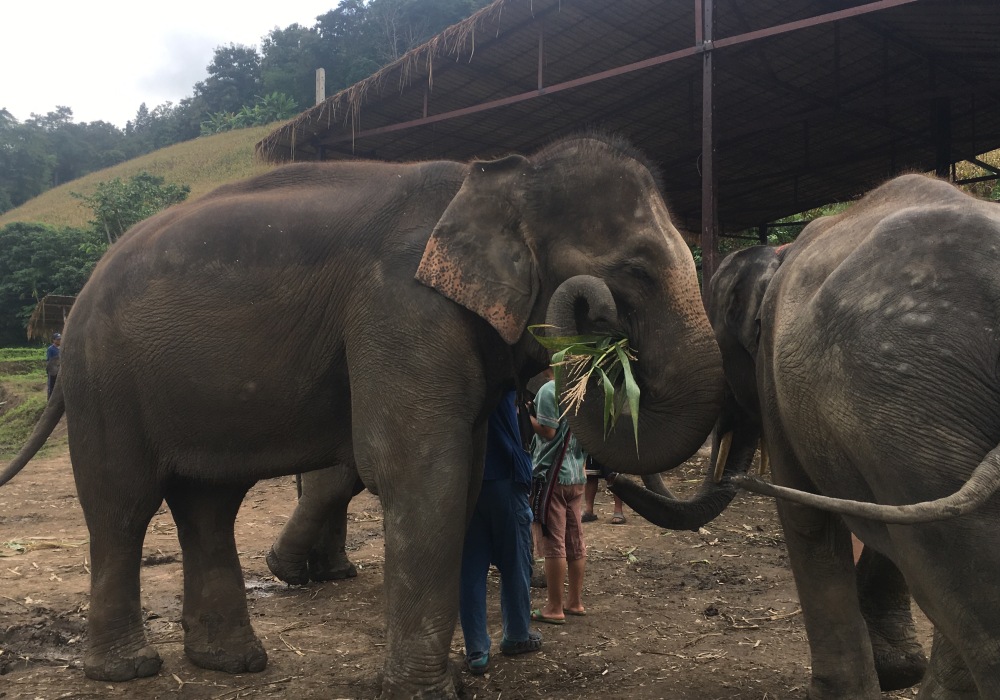 After the elephants had eaten, we walked with a couple of them to a mud pond where they could roll in the mud and play together. We learned that elephants use mud to avoid being burned by the sun as well as a sort of insect repellent. They are incredibly intelligent animals that always seem to learning; we witnessed this first hand when one of the younger adult elephants lifted a hosepipe to his mouth for a drink!

After the mud bath, we walked the elephants to the river so that they could wash off the mud (before they packed on more for sun protection!) The elephants walked into the river first and then the volunteers at the conservation made a little dam out of rocks from the river to slow down the current for the humans to walk in after the elephants. The elephants used their trunks to wash their backs and we were given little pots to throw some water on them. They soon had their own back though and sprayed water all over us. 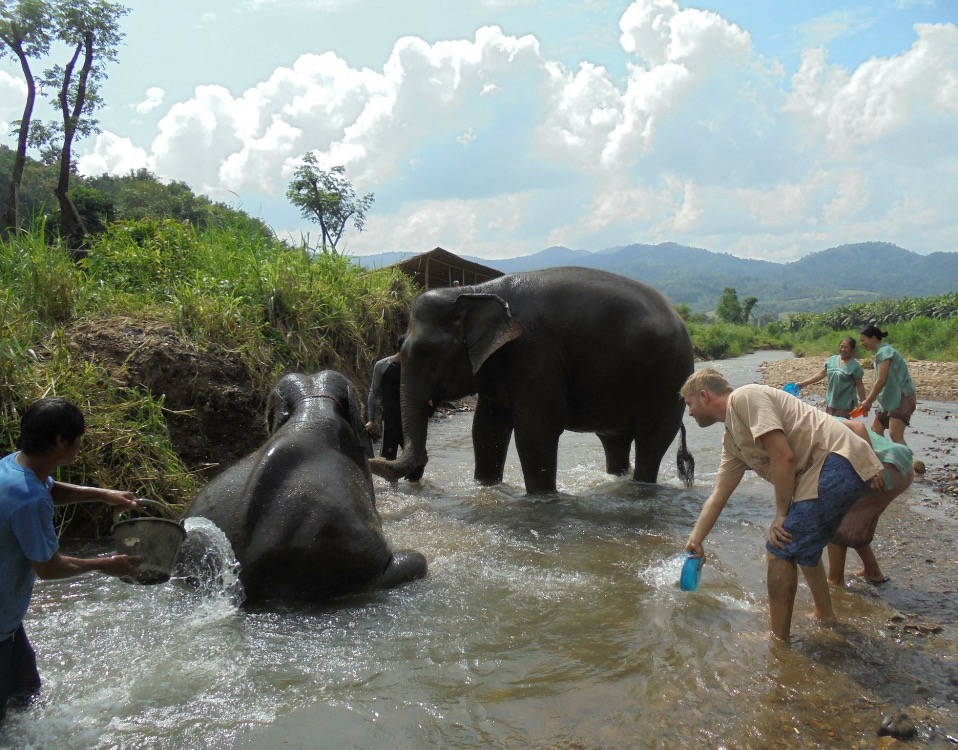 After washing, the elephants used a rocky wall next to the river to scratch their backs and grab at some leaves that were growing further up the wall to eat. This is where we left them as we were taken away from the river to clean up and get lunch before heading back into Chiang Mai. 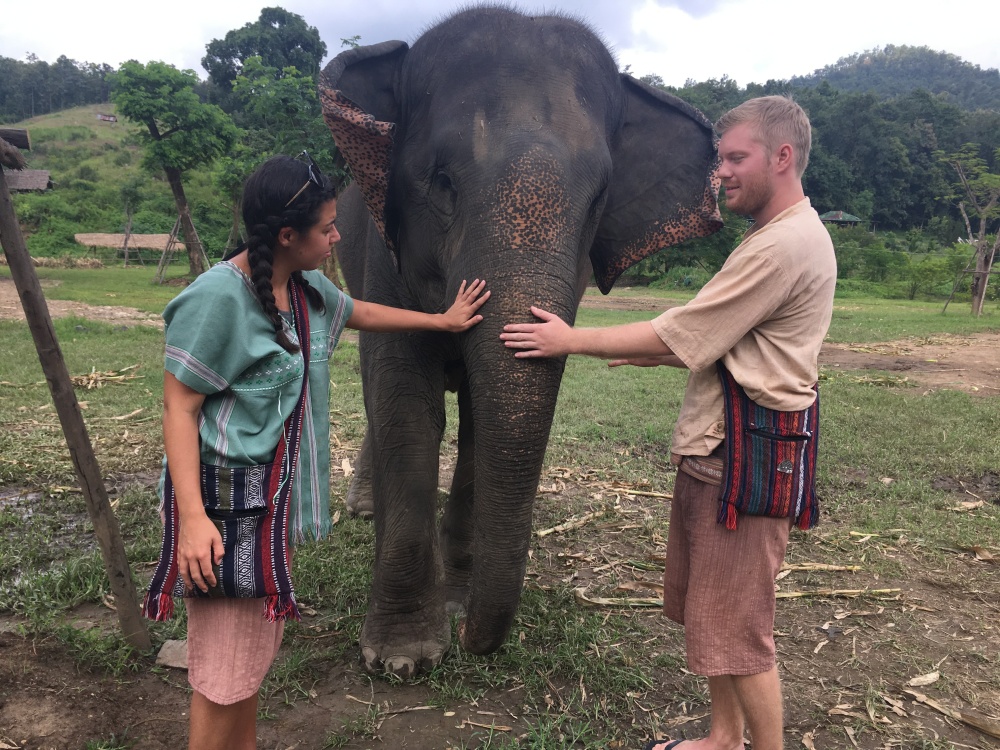 This trip has included so many wonderful experiences but I’ll never forget my day at the elephant sanctuary. It was a dream come true and something that I would recommend to anyone that visits Thailand.