During the early hours on the morning of 19th November 2017, James and I flew from Phuket to Hong Kong. Due to the flight being just before 4am, we decided not to book a hotel that night as we would have had to leave at mid- night anyway. Although this saved us some money (no accommodation cost and the flight was much cheaper), I wouldn’t recommend taking a flight this early as we felt disoriented and zombie like for the majority of the only free day that we had to explore Hong Kong. The lack of sleep also resulted in my phone meeting it’s demise as it fell into a toilet after I (very carelessly) kept it in my open jacket pocket *cries*.

Even in our tired and grumpy states, Hong Kong did not disappoint. I was born in the fairly small country of Wales and our Capital City of Cardiff doesn’t really have many tall buildings. Walking around Hong Kong made me feel somewhat ‘Ant – like’. I have never seen a city like it, it has a vast collection of immense sky scrapers, a lot of which are built around mountains making them seem even more steep.

Getting from the airport to our hotel was easy. You have an option of Taxi, Rail Service and Bus. We went for the bus as it was the cheapest option (£3 one way) and it actually dropped us off right outside our hotel. When I talk about visiting Hong Kong, a lot of people ask about whether it’s easy to get around and whether everything is written in Chinese. We were surprised at how easy it was to get around, the public transport system is really easy to navigate and nearly everything is written in English. If you are from the UK, you would get along fine in Hong Kong as they still use a lot of British systems i.e. their roads are laid out similarly to ours.

Once we dropped off our bags at the hotel and my phone met its demise, we spent some time wandering around looking for rice. You would probably be surprised how long it took us to find some rice in Hong Kong of all places, but it took us an hour which is longer than I expected it to! With the phone put in rice and then dumped in my backpack, we headed over to the Avenue of the Stars…to find that it was closed…Are you sensing how my morning was playing out that day? I actually started to find it hilarious but that could have been down to my lack of sleep!

It all turned out okay though as the Avenue had just been closed for renovations and the ‘Garden of Stars’ had been temporarily opened for our perusal. We spent some time wandering around looking at statues of different stars. We then tried looking to see what Asian stars had the same size hands as us and got overly excited when we found Jackie Chan and Jet Li’s cement hand prints. It was surprising to see that Jackie Chan had bigger hands than James considering James is over 6ft tall!

We left the gardens after an hour because it was particularly cold on our day of wandering, something that I was not expecting in Hong Kong! We had a little walk around the streets surrounding our hotel and I noted how many little ‘hole in the wall drinks’ and vending machines were available as there were loads of them! We then took refuge in a Starbucks for some warm caffeine as we were both cold and starting to flag. This was the first time that I had been in a Starbucks for ages and it was a nice novelty to see the Christmas drinks that had come into store. I was quite surprised to find that the festive drinks are different across the world. I had a Peppermint Mocha and it was AMAZING! I’m so sad that they don’t serve them in the UK.

After our little fuel stop, we had a little more time before we could actually check into our hotel; so, we decided to head over to the Hong Kong Science Museum which was located conveniently close by. The entry for the Science Museum was really cheap (I think it was around £2), it’s great for kids and was amazing for James and I because we are essentially big kids! The best way I can describe it is an interactive ‘discovery centre’ very similar to Techniquest which you would probably be familiar with if you are from the South Wales area. We got a second wind while we were in the museum and spent some time running up and down the different levels trying out the different puzzles and experiments. Apologies for the poor quality of the picture below.

We then headed to the hotel to check in, freshen up and have a much-needed snooze. I noticed that there was a lush cosmetics store just down the street from our hotel and our room conveniently had a bath in it, so I had my first bubble bath in 4 months – It was bliss after walking around the cold streets for hours! 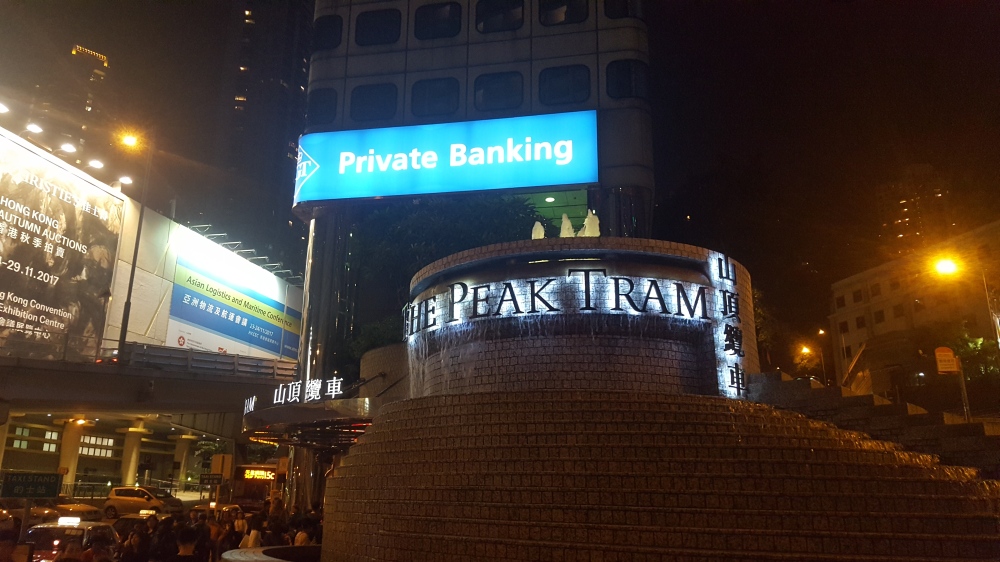 We didn’t want to waste our free evening so after a couple of hours we got back on the move and caught the tram up to Victoria’s Peak. I’m not a lover of heights and at points, the tram was going up bits of the mountain that were so steep we were starting to feel like we were going vertical! But after less than 5 minutes we were at the top of the mountain and could instantly see that the trip had been worth it! We paid a little extra to go to the viewing deck at the top of the shopping complex and I urge you to do the same if you ever visit the city because the view was breath taking! I’ve never seen such a beautiful sky line in my life. It was just incredible. We spent some time taking pictures and video calling our families so that they could also enjoy a bit of the view before backing out of the cold and wandering around the complex. It was just after 11pm by this time so we decided to queue for the tram back down the mountain and then head back to the hotel ready for a fresh new adventure the next day!