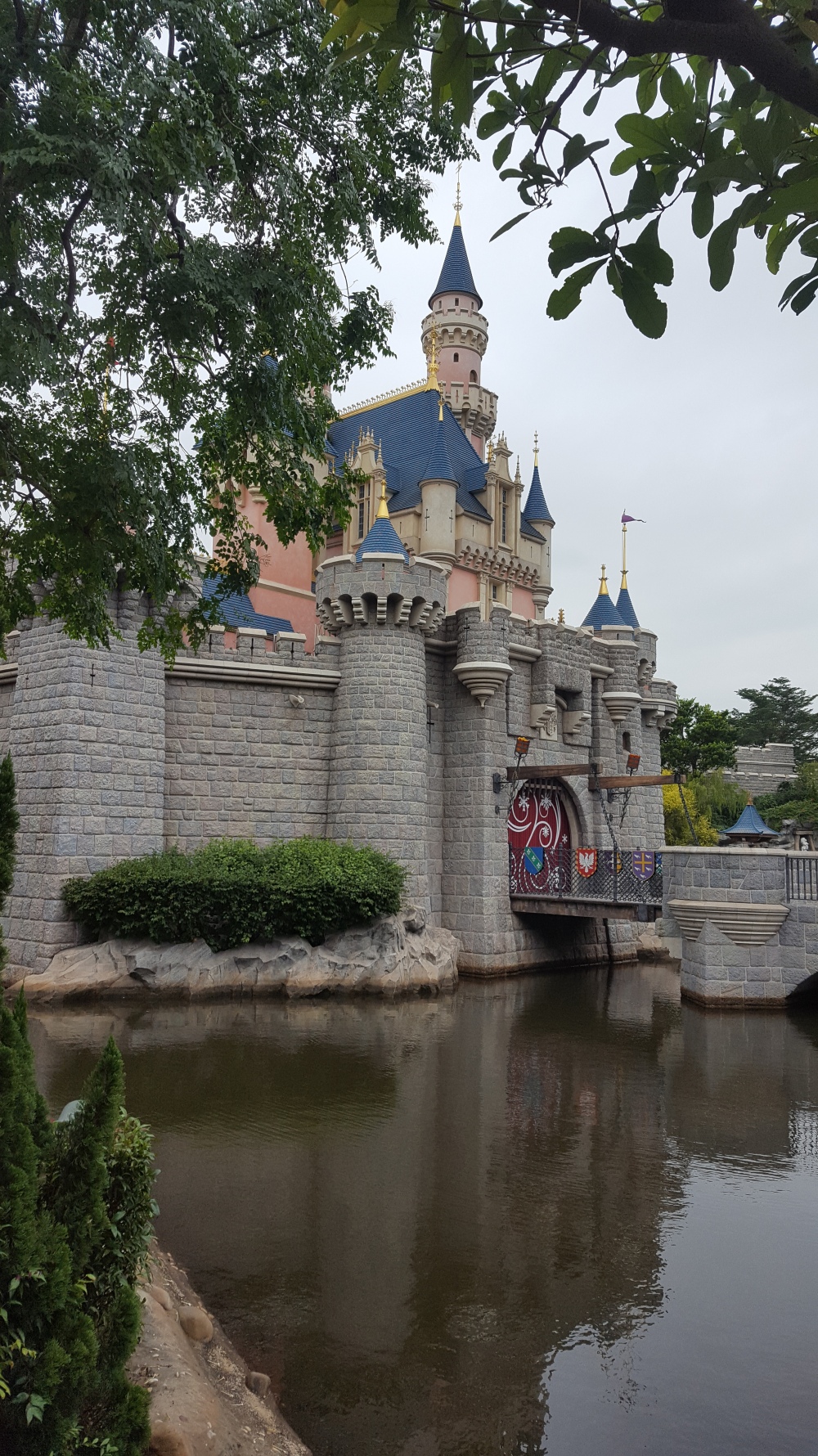 While we were in Thailand, James and I decided to head to Hong Kong. It was close enough that it would have seemed a shame if we didn’t visit. Plus, it meant that we could spend our 7th year anniversary in one of the most magical places on earth – Disneyland!

I’ve mentioned before that I am a huge fan of Disney. I watch all of the films that are released, collect memorabilia and I’m ‘Disney Basic’ in that it is a dream of mine to visit all 6 parks around the world. The Hong Kong park was park number three for me as I had only previously been to Disneyland Paris and Walt Disney World. James definitely indulges me in my Disney obsession and I think I’ve also got him onto the Disney park wagon as we are both currently planning another trip to WDW for September (eeeeee!). Unfortunately, as I mentioned in my previous posts, I broke my phone before we got to Disneyland which meant that James was my willing photographer for the day, I think he actually enjoyed it as well! 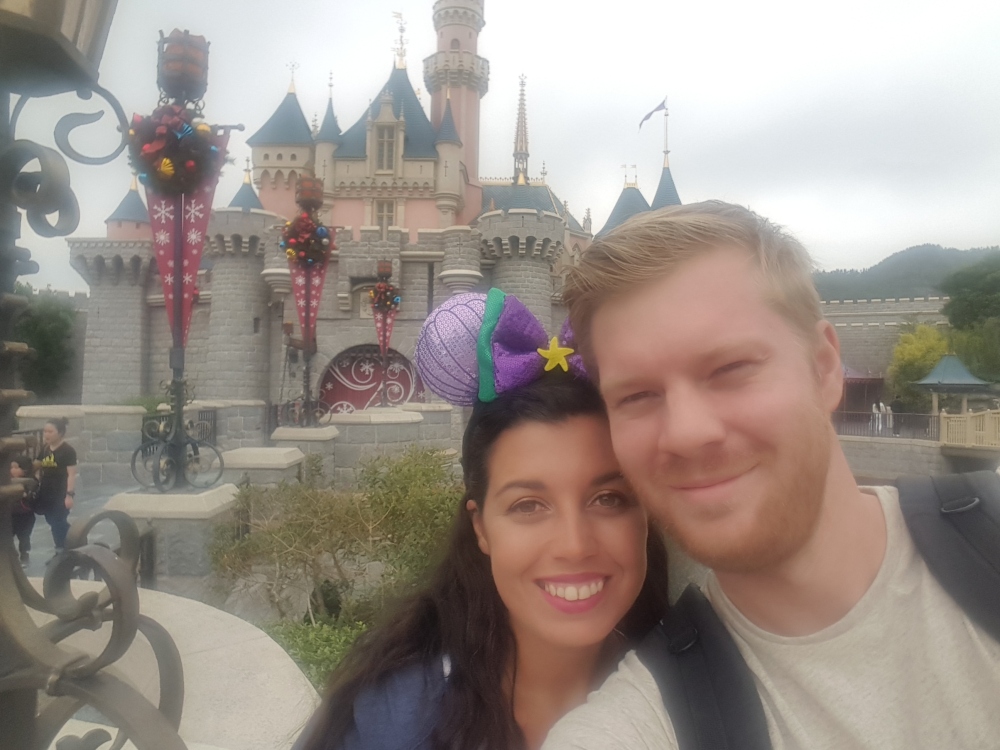 As a Disney Keeno, I made sure that I was up, dressed and presentable nice and early but not too early as the Hong Kong Disneyland park didn’t actually open until 10:30am. Getting to the park only built my excitement as Disneyland has it’s own special Disney train complete with Mickey shaped windows and handrails which takes it’s passengers to the park. We arrived and walked up through the gates (stopping for an obligatory photo), got our tickets and received some stickers along the way. We had to wait until 10:30am to actually be allowed into the park and as we waited we watched as a family were chosen to open the park gates with Mickey and Minnie Mouse. 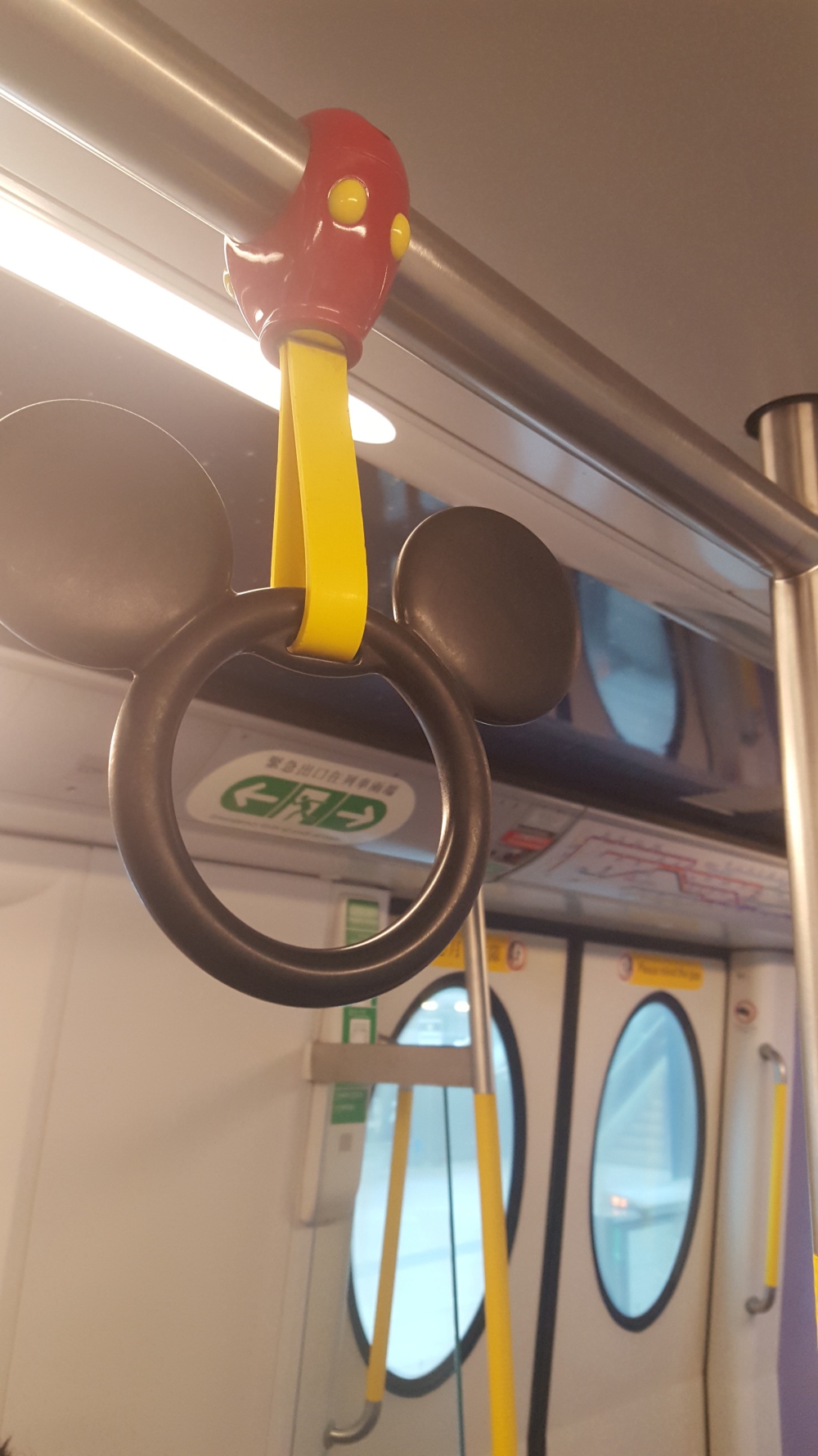 As soon as we were into the parks we started experiencing the magic; Christmas had definitely hit Disneyland and we queued to meet Santa Goofy which was a lovely experience made even better by the fact that you could then send Christmassy Hong Kong Disneyland Postcards to your family for free. I sent one to my mother and it had arrived within a couple of days! We had a little wander down Main Street USA, trying to take everything in before I nipped into one of the shops to make my mandatory purchase of Minnie Ears.

I noticed that Hong Kong Disneyland is a bit slower in opening to customers than other parks that I have been to as it operates using staggered starts. Even though the main rope drop took place at 10:30am, we rushed over to Adventureland to find that it was roped off until 11am. This meant a 10-minute wait which seemingly lasted hours because I was raring to go at this point! As soon as the cast members pulled in the rope, James and I rushed to the Grizzly Gulch (this is a similar version of Big Thunder Mountain). We were the first ones on and enjoyed it so much that we rushed back around once it had finished so we could go on it again without queuing. 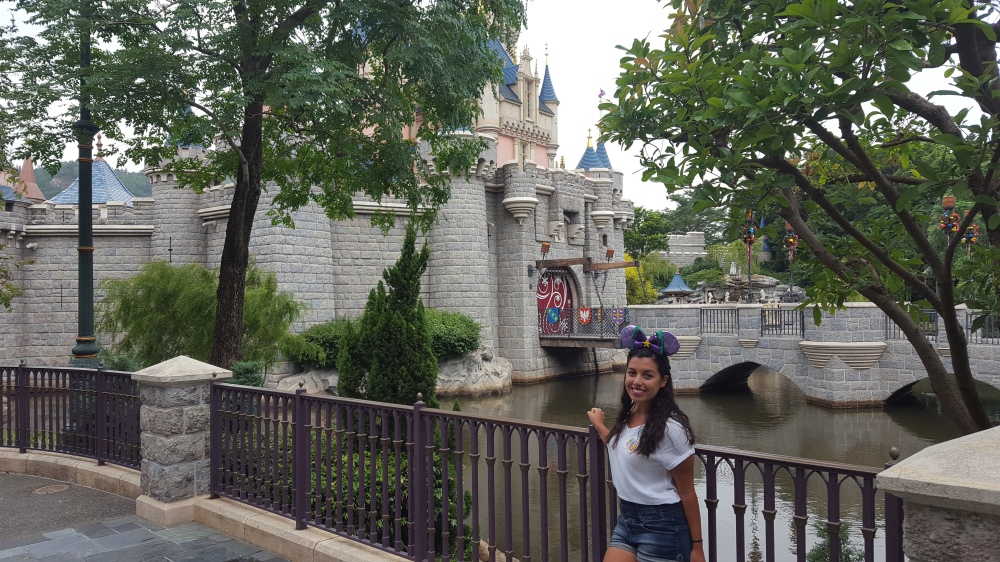 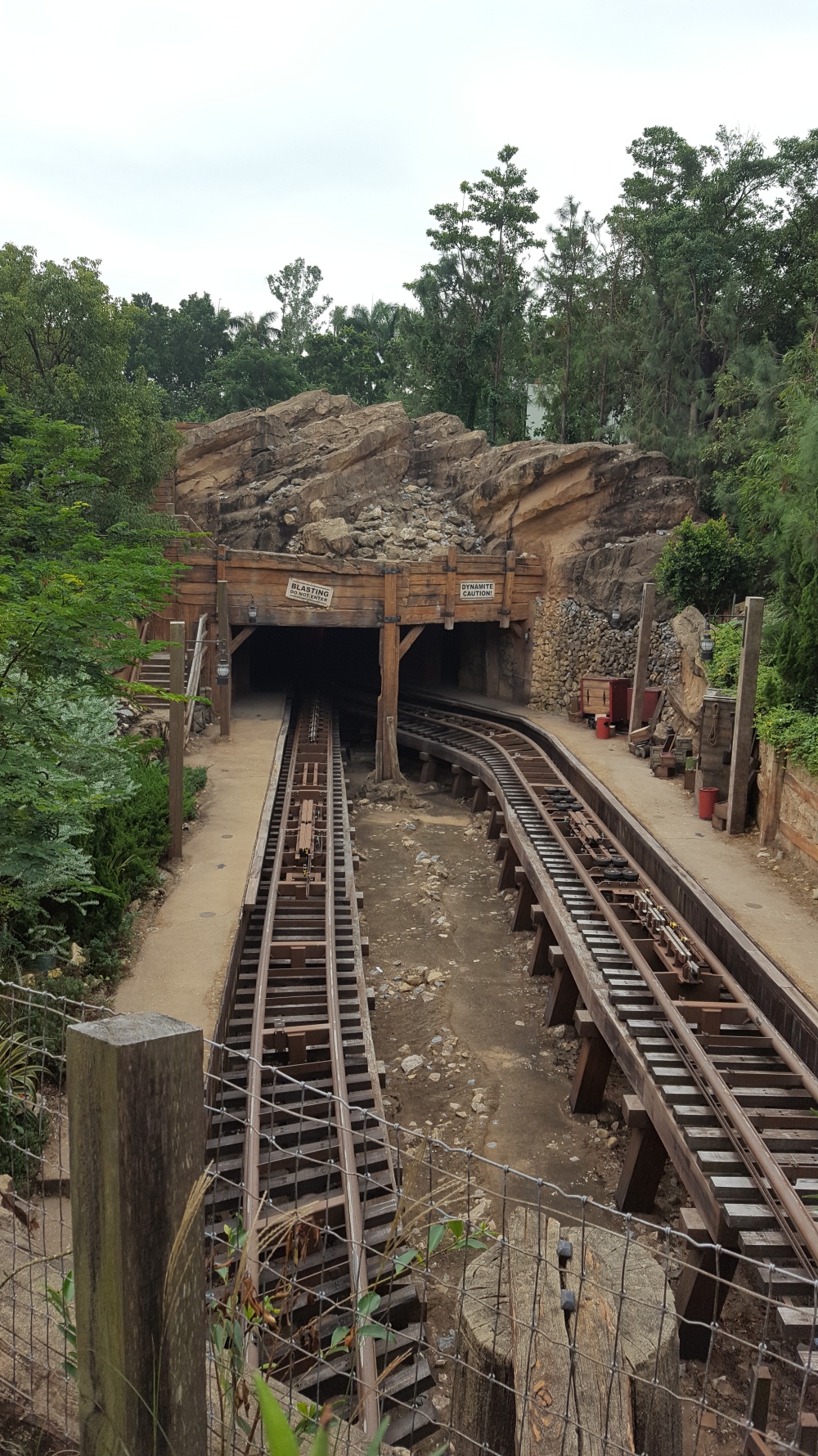 Next up was Mystic Point. This is the Hong Kong equivalent of the Haunted Mansion but with a twist; Instead of the usual ghost story, you follow Albert the Monkey as he unknowingly releases a Pandora’s box! 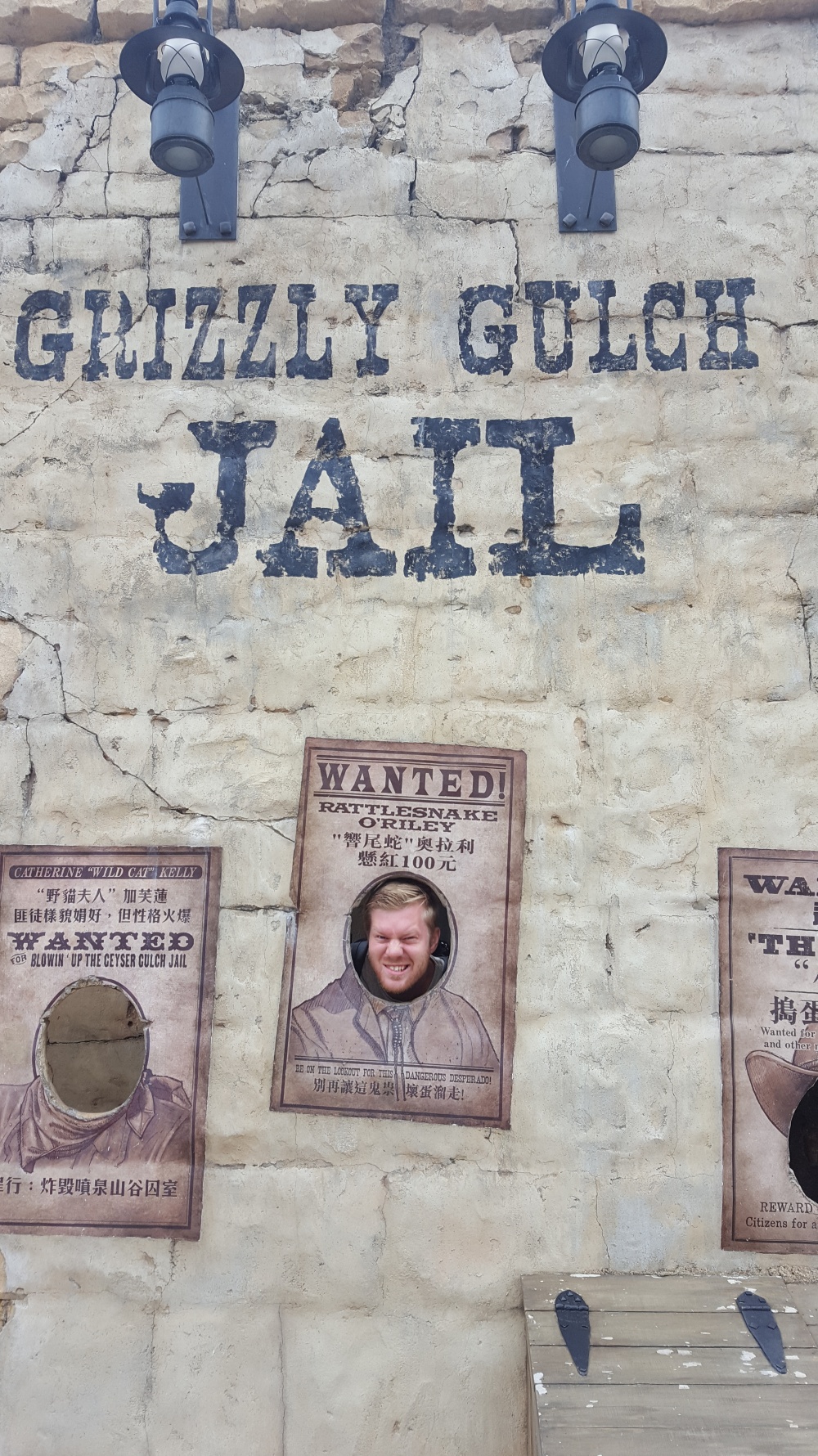 We blitzed through Toy Story land where I must admit I felt brave for going on the teeny parachute ride. I then nabbed a photo opportunity with Buzz, Jessie and some of the Army Guys.

To say that we tried to make the most out of that day and get everything done that we possibly could have would be an understatement. We were on a mission. We headed over to Fantasy land where we walked through the Fairy tale forest which was absolutely beautiful. Designed as a maze, there are little sections dedicated to each princess and their story. My favourite was the Little Mermaids section and I had the ears to match! 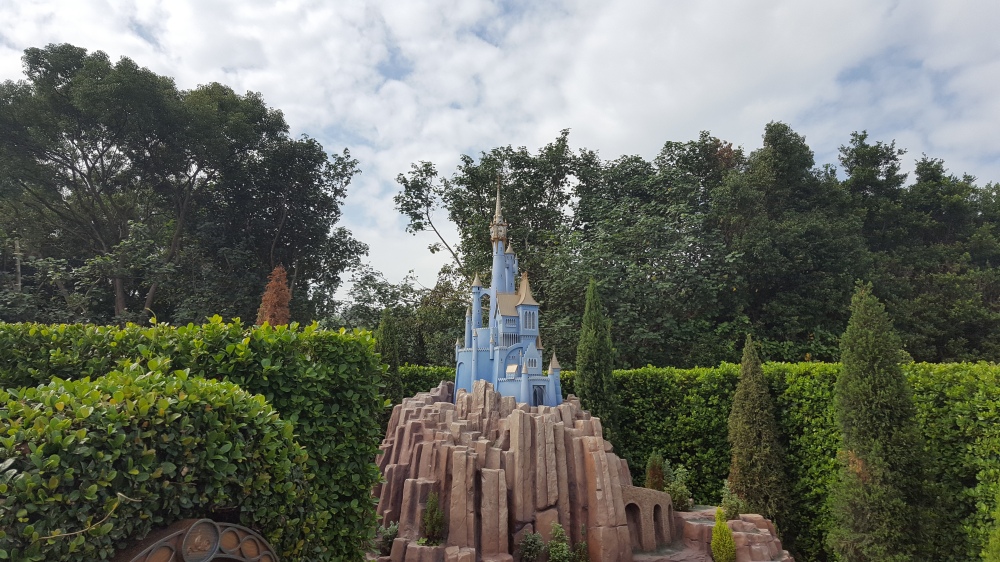 We’d been going for a couple of hours by this point, so we decided to slow things down and chill out watching Mickeys Philamagic. It was the first time that I’ve sat down to watch this show in any of the parks so a nice first experience, although slightly spoiled by the ladies in front of us filming the entire thing on their phones at our eye level. When we were exiting the theatre, I spied a queue to meet Ariel, so I jumped into it. It was a nice little character greet, she asked if James was my prince and told me that she loved my ears. 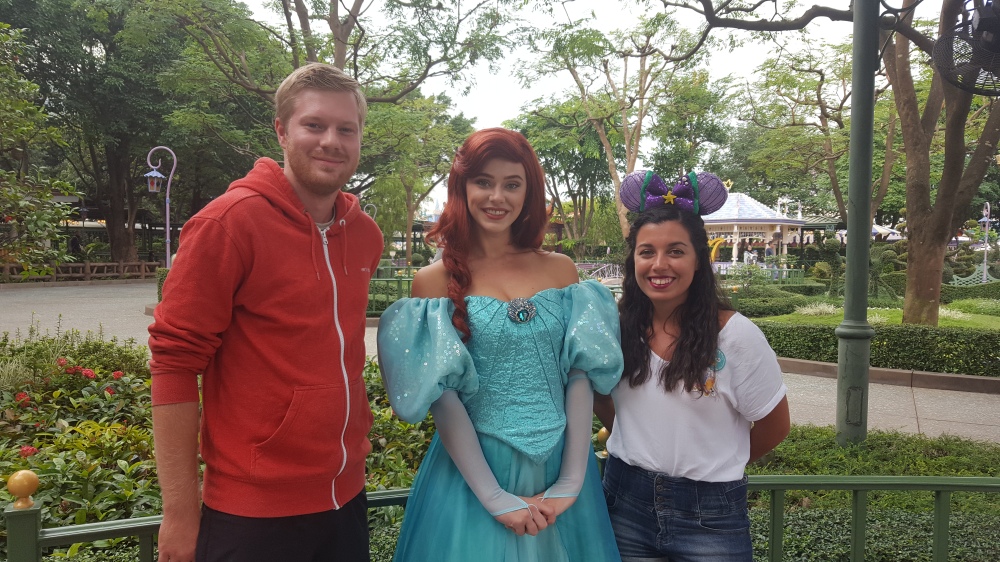 We were now coming up to our first show of the day; The Lion King. We rushed over to the theatre, stopping briefly on route to scoff down some Disney Hotdogs because at this point our tummies were rumbling! We piled into the auditorium for the show and it did not disappoint! It was fantastic, the dancers are majestic and interacted well with the audience and giant creatures were rolled out near the stage which I was not expecting at all! 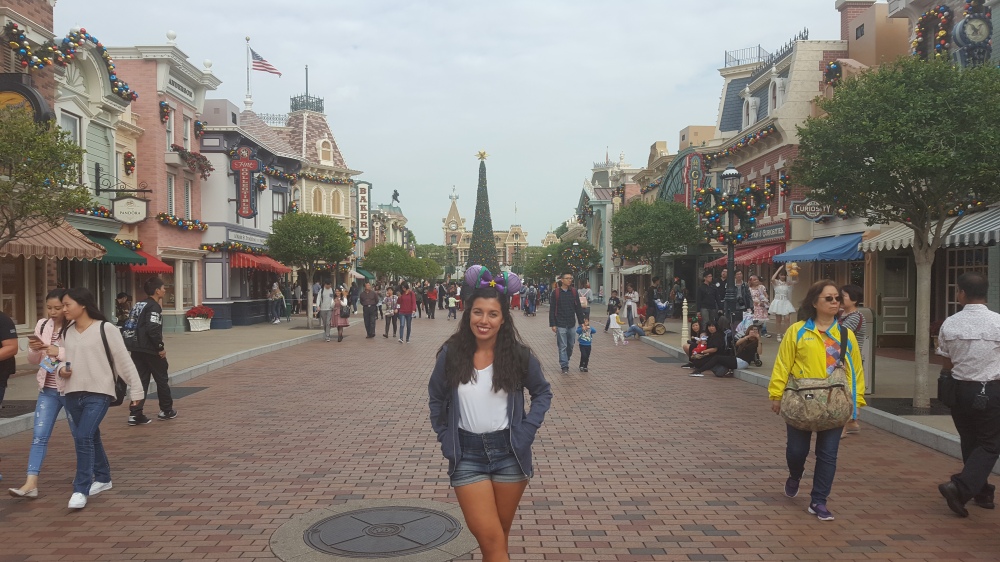 The show finished at 14:45 and the Flights of Fantasy Parade was due to start at 15:00 so we headed over to Main Street USA to get some snacks and a good spot for the show. The parade was really fun to watch, there was a lot of audience interaction and at one point all of the children near us were led out to dance with fairies in the Peter Pan and Tinkerbell section which was really cute. It was interesting to see how it differs from the Florida ‘Festival of Fantasy’ parade; I think there is less focus on the princesses in the Hong Kong parade and a lot of the floats have inflatable tops which made them seem a bit taller.

After the parade, James was itching to go on some of the bigger rides in the park, so we decided to finish off Fantasyland later in the day and made our way into Tomorrowland. I bravely (in my opinion) agreed to go on Space Mountain; I always worry about Space Mountain because they are different in each park, I don’t think I could bare to go on one like Hyperspace Mountain in Paris! It all turned out to be okay in the end though, it wasn’t as tame as the Space Mountain in Walt Disney World, but it was nowhere near as wild as the one in Paris. After that we decided to do Iron Man experience and then head back into Fantasy land for some dinner.

We ended up grabbing a pizza in the Royal Banquet Hall because it was fairly central and we had a few things that we wanted to get done before the 6pm showing of ‘Mickey and the Wonderous Book’ which is a show that isn’t in any of the other parks and was a definite on my to do list. While we were in the Royal Banquet Hall, I also bought these little ‘Piggy Pork Buns’ because who doesn’t want to eat dim sum when it’s as cute as this?!

At night the park took on a whole new life, it was gorgeous! We jumped on ‘It’s a Small World’ which was the longest out of all of the parks we’ve been to but definitely also my favourite; each country has a character that has a story based in that country included for example, they had Peter Pan and Wendy in the UK section and they had Lilo and Stitch in the Hawaii part of America. They even had an underwater section for Ariel, there was so much detail! We then made it over to the Winnie the Pooh ride in time for our Fast Past.

At quarter to six we decided to start queueing for the ‘Mickey and the Wonderous Book’ show as we wanted to get decent seats. We ended up pretty central so we could see all of the stage which I was glad about because some of the show is in Chinese so there are some English translations shown on the stage sides. The show was incredible. It had so many characters involved and a lot of different musical numbers that had been mixed really well. Guys, I’m not going to lie – I got a bit emosh. 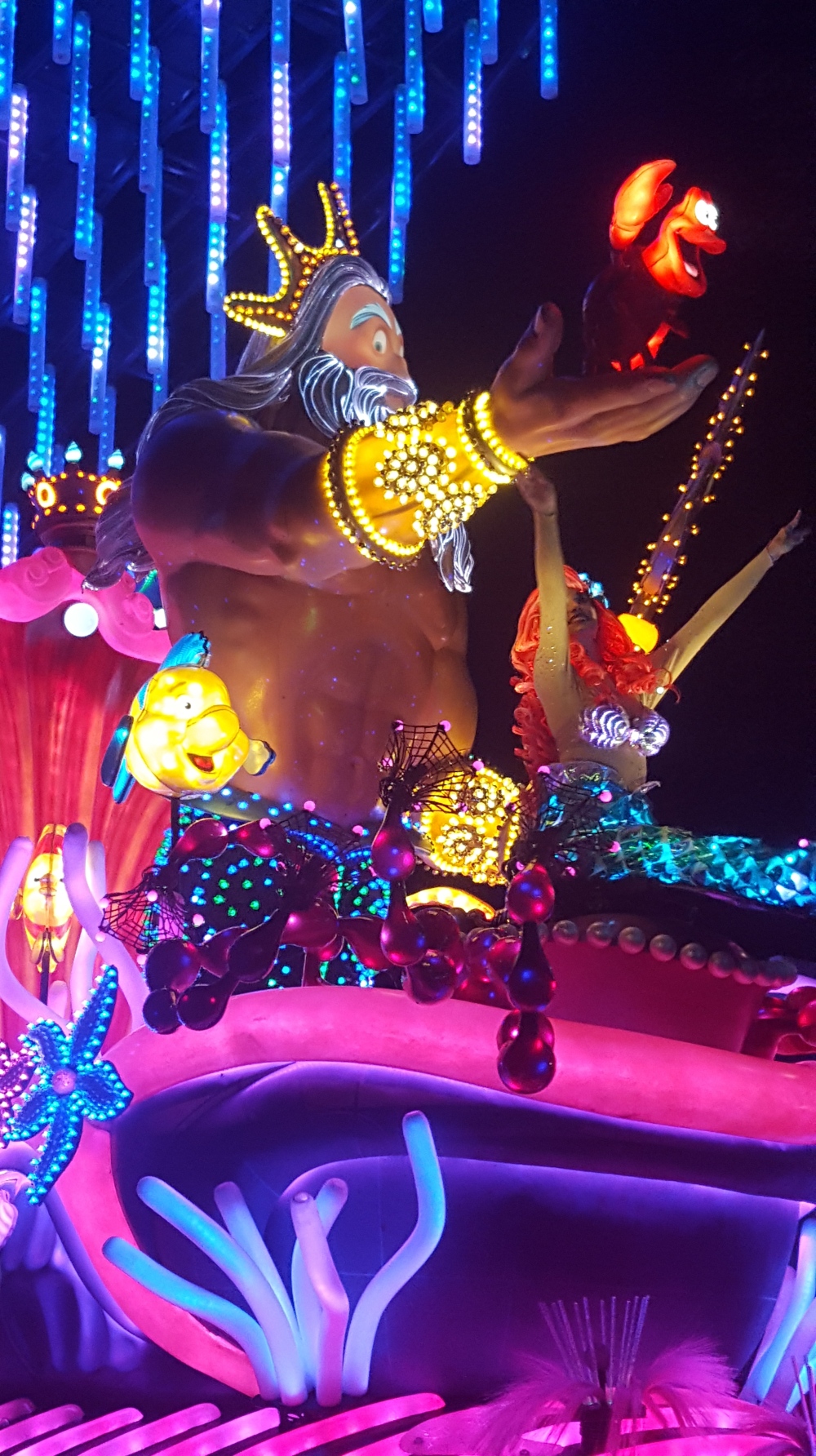 The night was starting to draw to a close, so James and I found spots for the ‘Disney Paint the Night’ Night time Spectacular Parade. One thing that had been apparent all day, but which was particularly obvious at this point was that the park was quite quiet. We found a spot to sit down and enjoy the parade with only a few people sat around us, it was great! I hadn’t seen a parade like this before and unfortunately, my picture quality was quite poor due to the lighting. Basically, the majority of floats and cast members have lights in their costumes which makes them look even more spectacular than they already did. The parade was followed by the light projection on the castle. James and I got some mint hot chocolates and cwtched up to watch as the fireworks were set off in time with the light projections. It was mushy, but it was really sweet as it was our 7th year anniversary after all! The show on the castle was fantastic and one again, I got a bit emotional. The castle in Hong Kong Disneyland is tiny so I was a bit sceptical about how the show would look at first, but Disney never really disappoints with their shows and the projections were done really well. 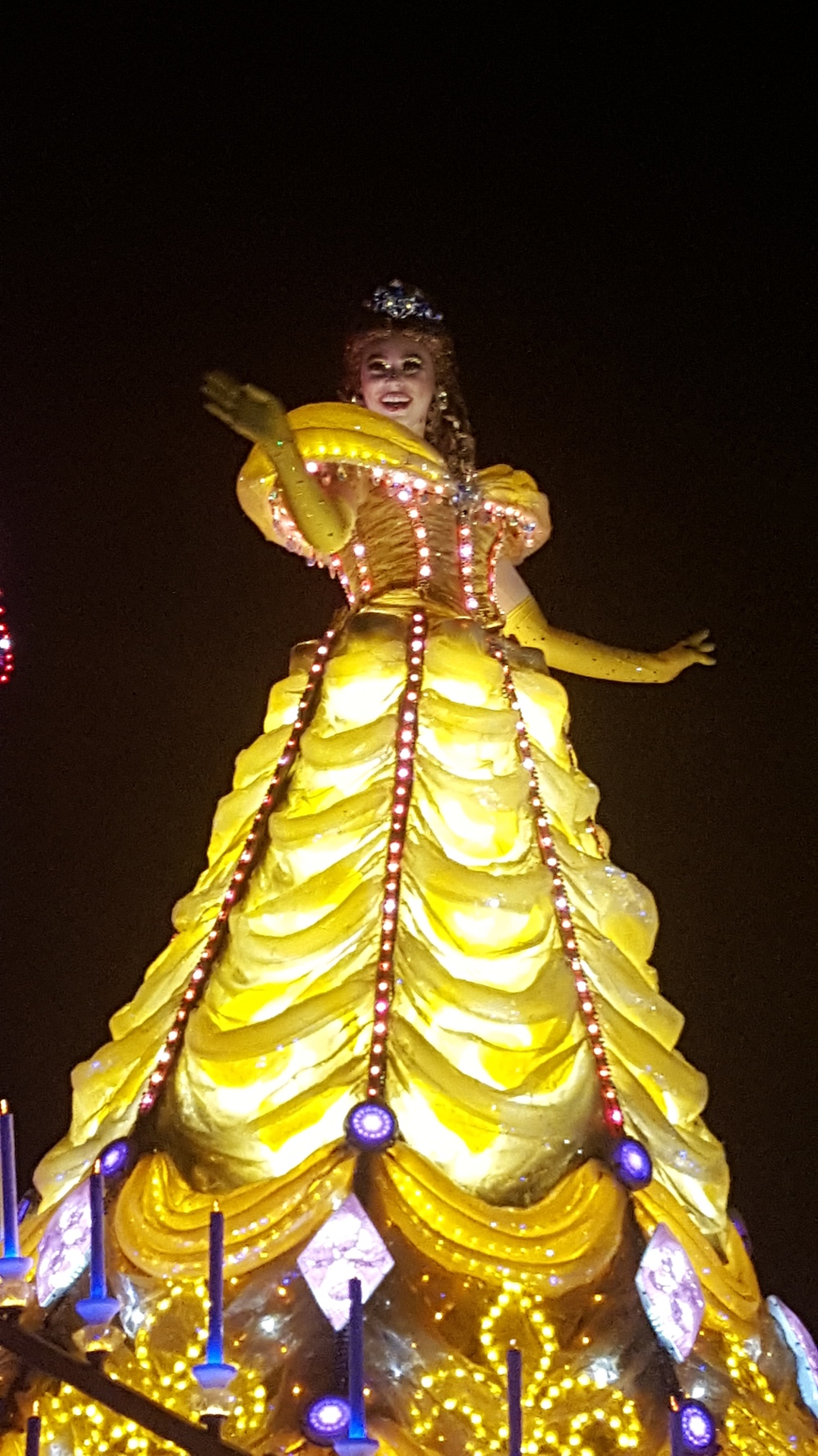 Once the last show was done, I followed the crowds and rushed into the shops on Main Street USA to nab some souvenirs. I managed to grab some sweets and a ‘Hong Kong Disneyland Pin’ but gave up after that because the shops had become crowded, and the cast members were starting to close the shop doors to stop new people from coming in. 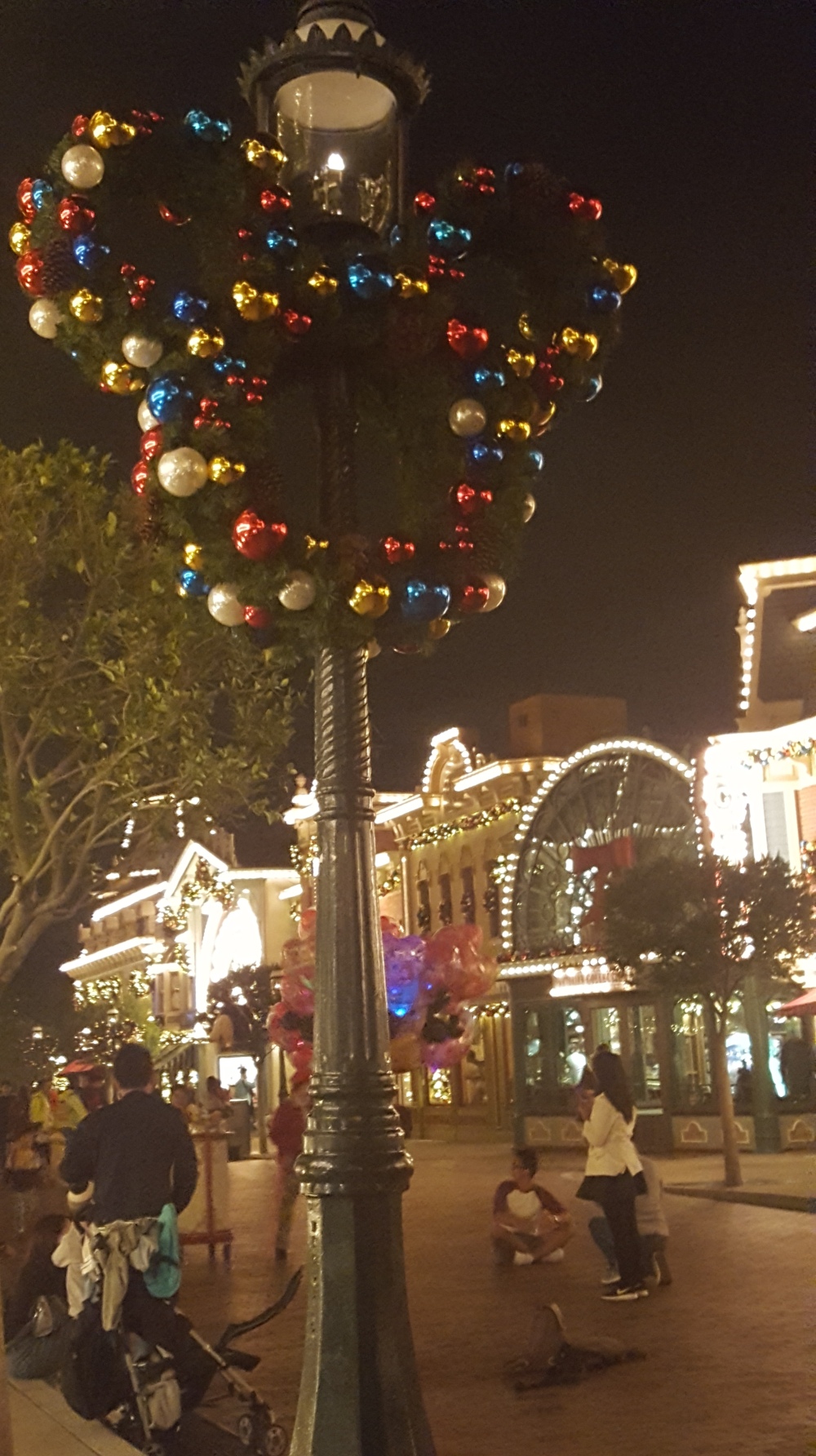 I had a magical day in Hong Kong Disneyland, made even better by being there to celebrate a special day. I don’t know if I would say that it’s my favourite of the Disney parks as I missed the ‘Pirates of the Caribbean’ and ‘Peter Pan’ rides, both of which are not in Hong Kong; but it definitely held some of my favourite rides out of the other parks as I thought ‘It’s a Small World’ and the ‘Grizzly Gulch’ were both fab. If you want to spread your Disney Wings and plan on doing one of the Asian parks, I would definitely recommend Hong Kong.