On arrival into Singapore, the first thing that struck me is how lovely the people are. As soon as we sat in our taxi (which we were happy to take as they are strictly monitored in Singapore, preventing passengers from being ripped off), the driver started asking about our trip and giving us tips on local restaurants. We couldn’t locate our hostel so he even rang them on our behalf to find the best way of getting us there without being charged for entering the congestion zone, something I was very greatful for as we were arriving quite late into the evening!

We stayed in the Pod Boutique Hostel on Beach Road in Singapore. This was a clean hostel and the first where James and I stayed in a dorm as Singapore was so expensive for accommodation. For a queen-sized pod (which we shared) in a dorm, it cost us £20 each a night.  The hostel did have a lot going for it though, it was fairly central, close to public transport, was very clean and offered a free breakfast and laundry facilities so I didn’t feel put out during my stay. 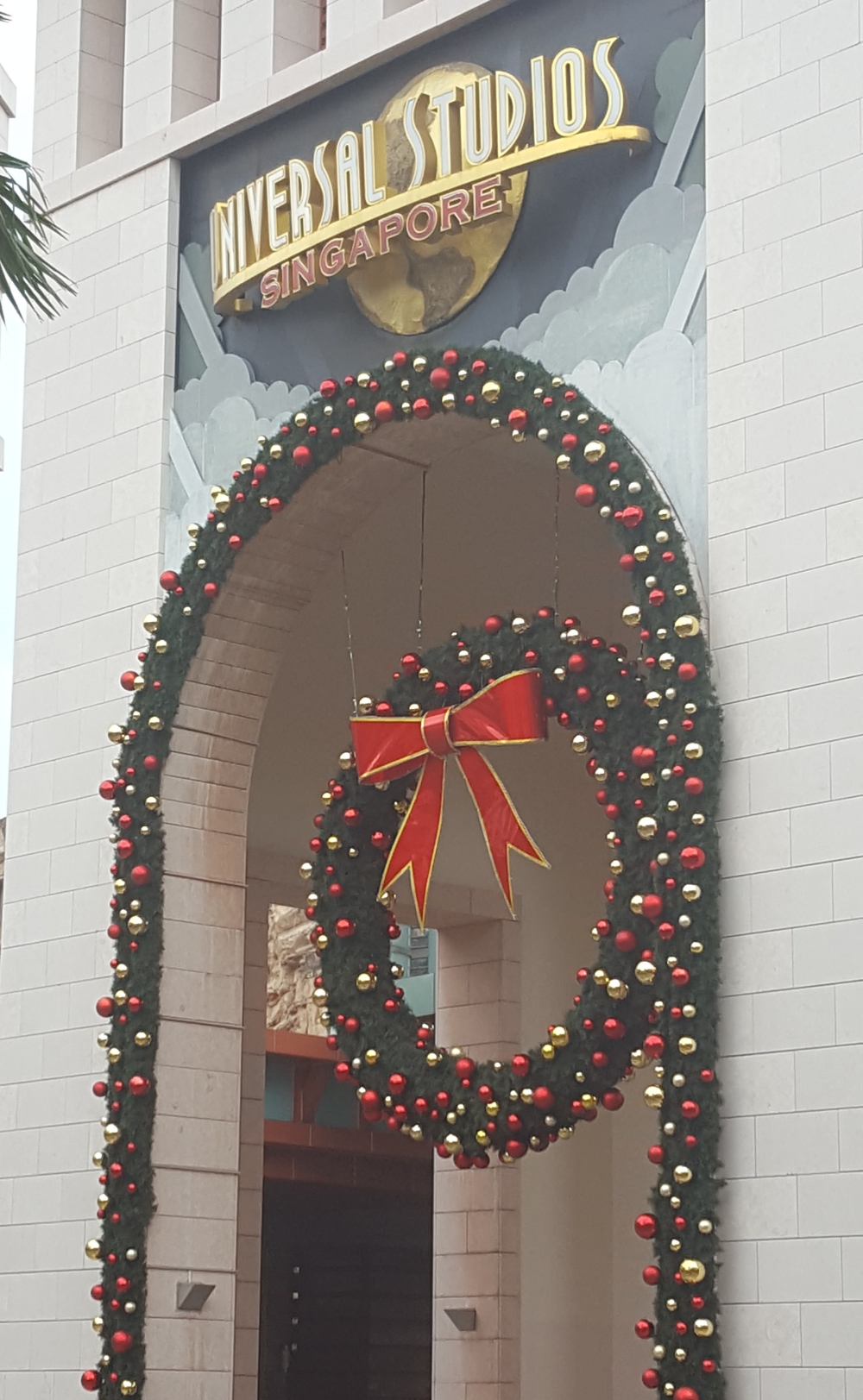 We got up early on our first morning and decided to head to Sentosa island so that we could visit Universal Studios. This was our fourth theme park of our trip and we were glad that we decided to bite the bullet and visit. The park was decorated for Christmas and looked beautiful! The park is a little different to the parks in Florida, we started out in the ‘Madagascar’ zone which isn’t in the Florida park but was great fun.

Another difference between the parks is the amount of space dedicated to Shrek. In Florida, he just has one ride, in Singapore, he has an entire zone with loads of detail included called ‘Far Far away’. I loved it! We went on the ’Enchanted Airways’ (a roller coaster where you are riding the dragon), followed by the same 4D ride that is located in Florida. We then rode on ‘Puss in Boots Giant Adventure’ which is a family friendly roller coaster where you go up a beanstalk to try and steal the giant goose’s golden eggs. 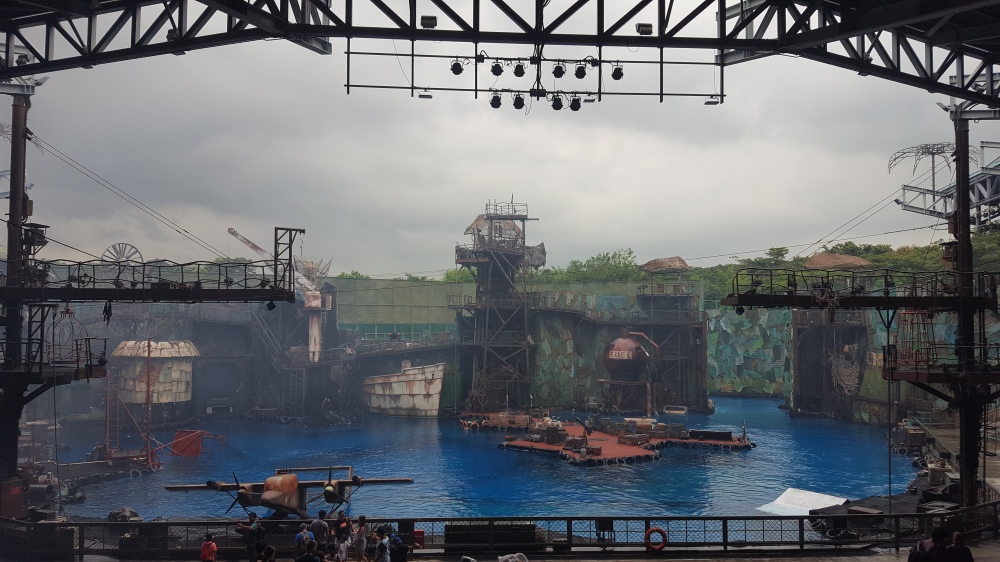 We had a whole day in the park and since it wasn’t particularly big we decided to take it easy and watch the ‘Water World’ stunt show. As soon as it finished however, the heavens opened! This resulted in a lot of the rides being stopped so we decided to grab some lunch and wait for it to blow over, which it did not. No biggie though, we were determined to carry on so we bought a poncho (for me because I was woefully unprepared for rain) and tried to tick some indoor rides off the list. The first being ‘The Mummy’ Rollercoaster which I think may have been a bit wilder than the Florida ride as it included some sections where you go backwards on the track as well as a few track changing spins, there was a drop near the end that was unexpected and I think caused the girl sat next to me a bit of a shock as she burst into tears at the end of the ride. As someone who suffers with anxiety when it comes to big rides, I felt awful for her! I’m not sure what she was expecting but it clearly wasn’t what she had just been on.

We blasted through the Transformers ride (another one that was indoors) and were surprised to find that it was a walk on. Very odd considering that it was torrential outside! We did find that most of the parks we visited were very quiet, we put this down to wisely choosing week days. Thankfully, once we came off the Transporters ride, the rain had lightened up so the giant rollercoasters re-opened. James was delighted about this and rushed off to ride them, leaving me behind to have a browse through some shops. It was getting a bit later in the day and the park closed at 6pm so we ended up blasting through the ‘Lost World Zone’ where we were able to go in two Jurassic Park rides before heading to the ‘Hollywood’ Zone in which I made James join me on the ‘Sesame Street Spaghetti Chase ‘. We finished off with ‘Lights, Camera Action! Hosted by Stephen Spielberg’ before making our way out of the park at closing time.

We took our time having a browse around the surrounding complex before grabbing dinner and heading back to the hostel. One thing I noticed during our browsing is that Singapore has a love of ‘toast’ shops, I think these are generally just bakeries. I couldn’t resist trying this little bun when I saw it!

The next day, we used the metro service to get to the Gardens by the Bay. I’d been looking forward to this part of Singapore since we had started planning our trip. When you enter the parks, you’ll notice a queue to buy tickets for a shuttle bus to the conservatories, we chose to walk because it was not a far distance at all (plus it’s free to walk). The view as you walk up towards the conservatories and past the super trees is amazing so we took our time to take everything in. 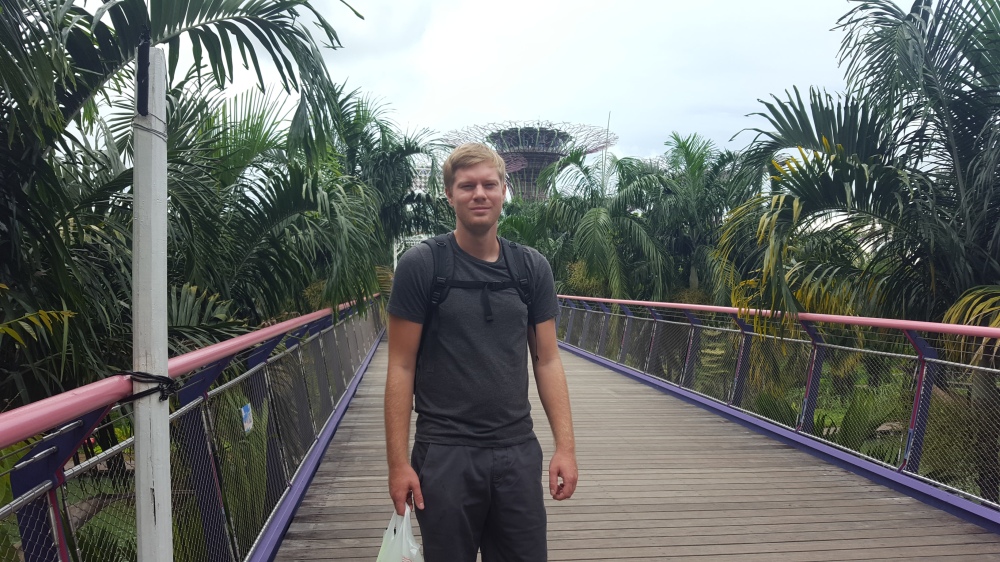 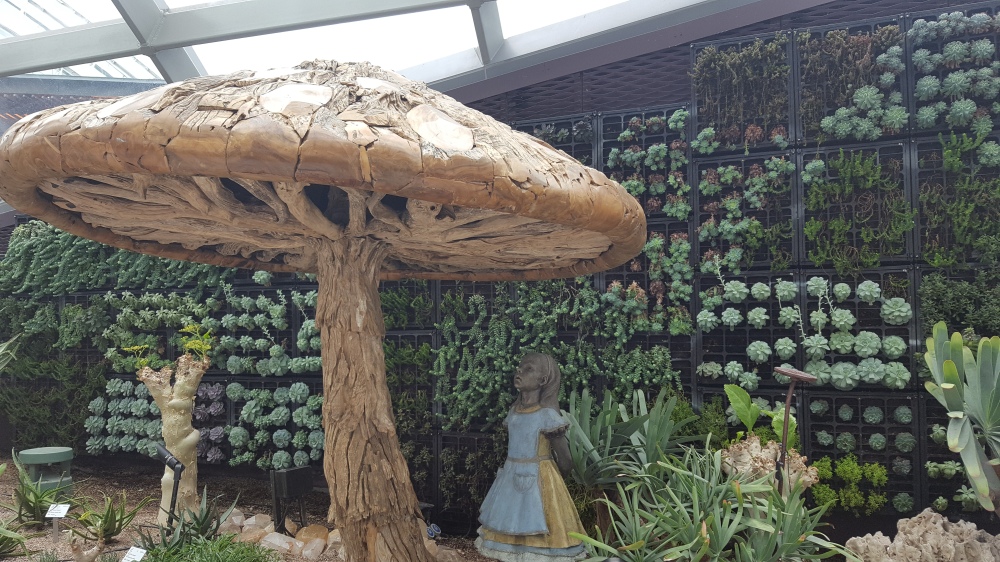 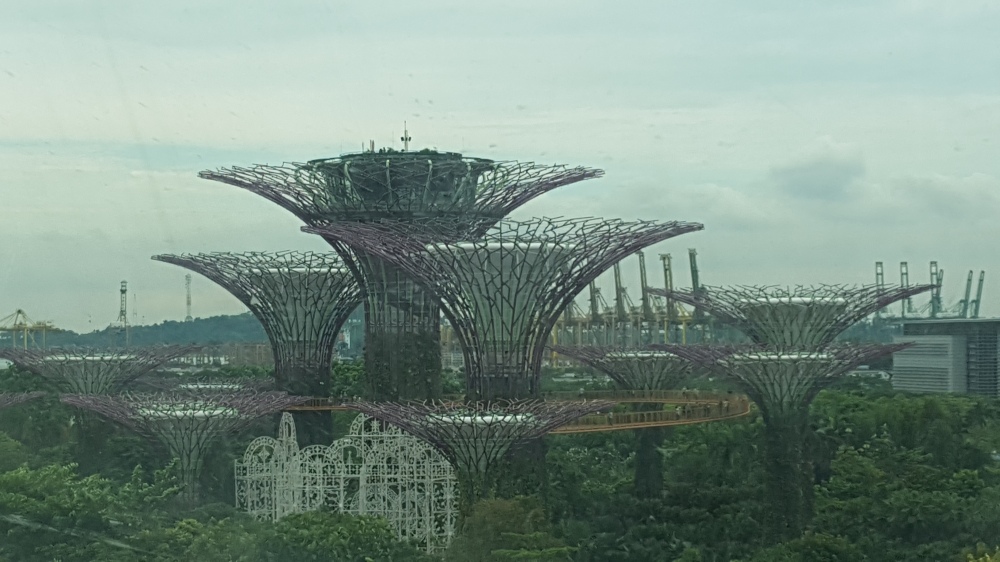 We chose to purchase a ticket for both conservatories. The flower conservatory was interesting and had a lovely Alice in Wonderland theme but the Cloud conservatory absolutely stole the show for me! It looks like a giant mossy mountain built in the middle of the conservatory with waterfalls cascading off it. We started off by walking around the outside of the mountain before heading inside and making our way to the top. The mountain is designed for you to walk down it via circling bridges so that you can get a full view of it’s beauty in all it’s glory. I obviously took full advantage of the amazing photo opportunity that it provided. 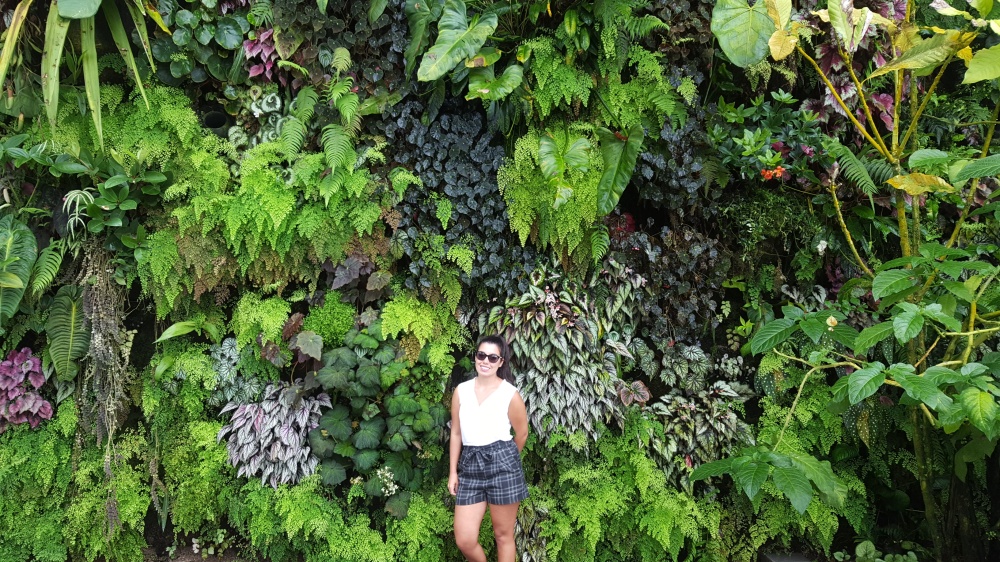 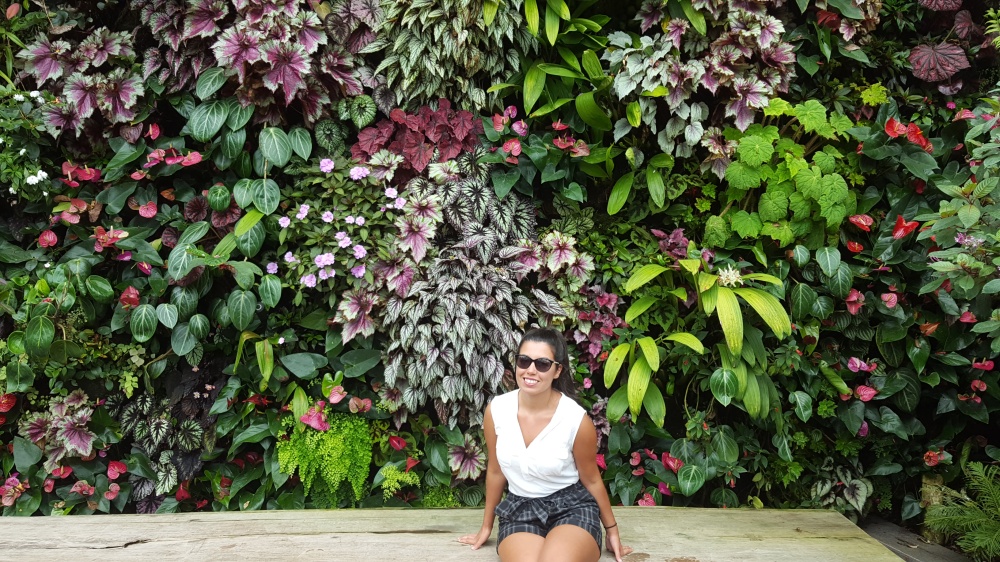 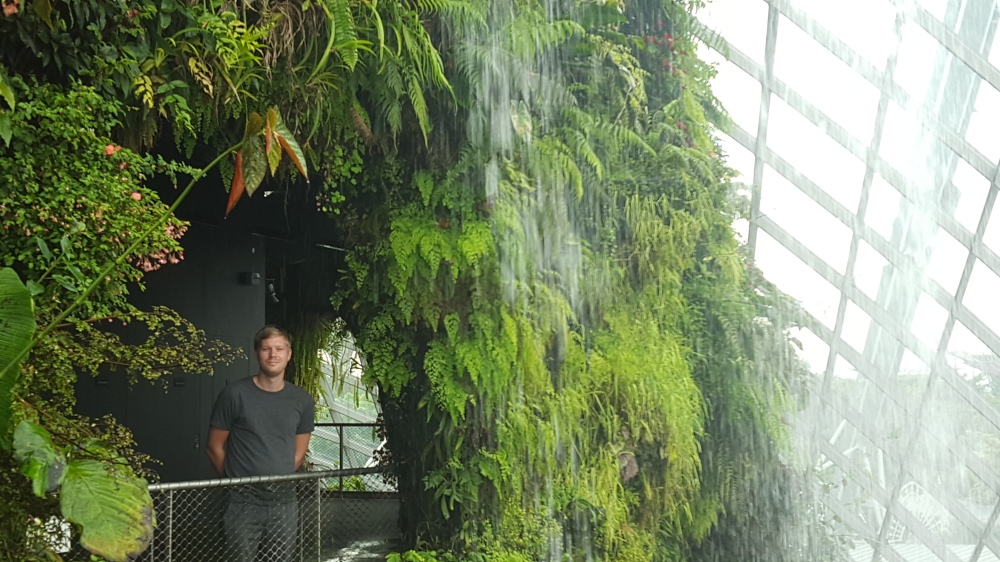 After we had finished in the conservatories, we headed towards the central part of the super tree grove. It was beautiful and did not disappoint after all the months of waiting to see it! 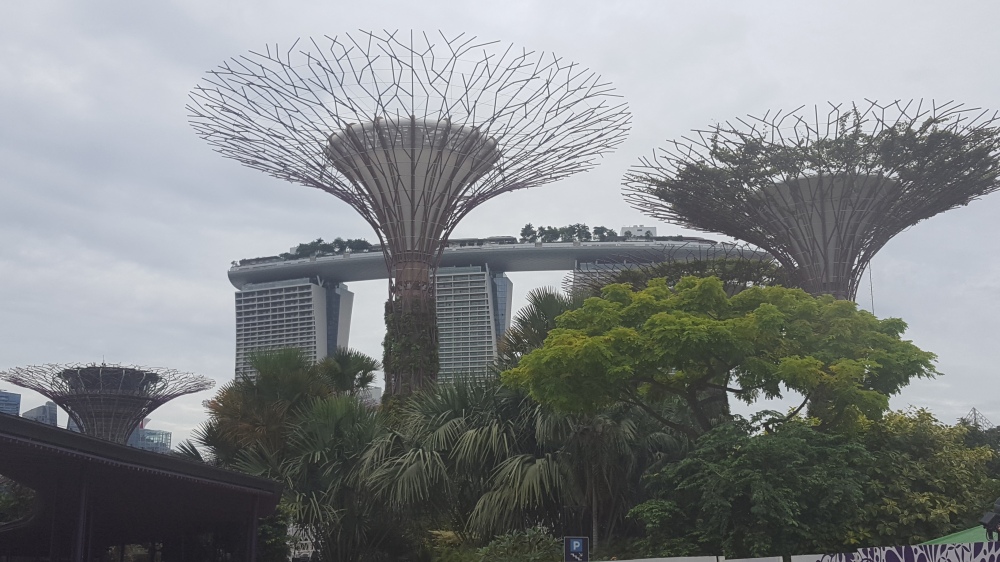 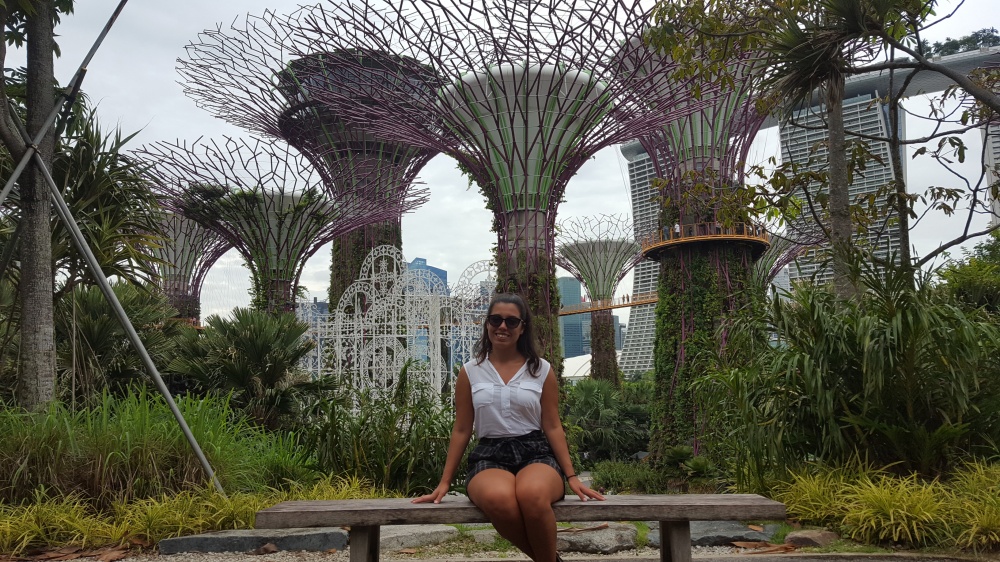 As we had a flight to Melbourne later that night, the rest of the afternoon was spent at a leisurely pace. We found a shopping mall where I was surprised to find a Bath and Body Works; as we don’t have this chain in the UK I got very excited and made a couple of purchases including a ‘stress release’ hand sanitiser and a ‘feeling festive’ mini candle (Which I somehow managed to keep intact for the rest of my trip).

Once we were bored of shops, we spent some time wandering the streets looking at restaurants before deciding on Indonesian food which we enjoyed in a bustling street. I enjoyed Singapore, it seemed quieter than I was expecting but the calm was welcome after a busy few days in Hong Kong! It’s certainly somewhere that I would recommend for a two day stopover if you were headed to Australia or New Zealand!